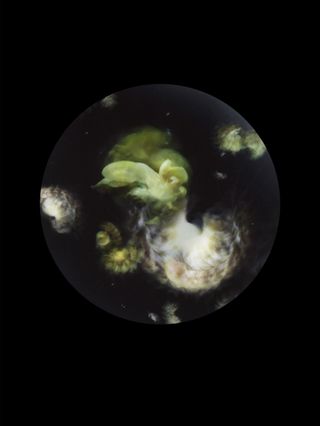 A series of eerie, stunning images reveals the extent of plastic polluting the world's oceans — by transforming the trash bits into images that look like teensy, ethereal sea creatures.

Barker originally came up with the idea for the project at a scientific conference in Berlin. She met a researcher from Cobh, Ireland, who told her the long-lost story of marine biologist John Vaughan Thompson, who had made many of his observations in the same region.

"He made these pioneering discoveries about plankton," yet his history and life has remained mostly obscure, Barker told Live Science.

At the same conference, she'd heard a talk about plankton that had begun to ingest plastic drifting in the ocean. (A huge swath of the Pacific Ocean ― an area the size of Texas ― is filled with plastic, and within this region plastic islands have even begun forming. Other research has shown that the oceans are filled with 250,000 tons of trash.)

She decided to recreate the observations of Thompson, but focus on the newer "inhabitants" of the ocean.

"My idea was to revisit the areas where he'd collected plankton, but I'd collect plastic," Barker said. "He was collecting natural objects, and now in place of the natural objects are the man-made debris."

So, Barker returned to Cobh and gathered debris from the seashore, then carefully composed photographs to make the plastic specimens look like slides of plankton from the 1800s. The resulting images resemble slides of fantastical microscopic plankton.

The photographs were "done in dim light, which enables them to move and make these sort of creations, almost sort of swimming as if they're plankton in the ocean."

She also created a cabinet full of specimens and a naturalist's notebook from the time meant to represent Thompson's research memoirs published in 1830s, called "Imperfectly Known Animals."

The series of work "Beyond Drifting: Imperfectly Known Animals" will be on exhibit at the FORMAT Photography Festival from March 24 to April 23, and at the Prix Pictet Award at The Victoria & Albert Museum, London, award ceremony on May 4 (with public viewing available from May 5 through May 28), and at the Sirius Arts Center, in Cobh, May 27 to July 2.