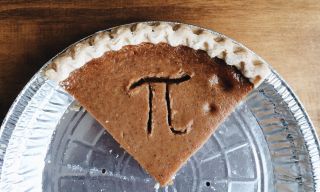 Math nerds everywhere are digging into a slice of pecan pie today to celebrate their most iconic irrational number: pi. After all, March 14, or 3/14, is the perfect time to honor the essential mathematical constant, whose first digits are 3.14.

Pi, or π, is the ratio of a circle's circumference to its diameter. Because it is irrational, it can't be written as a fraction. Instead, it is an infinitely long, nonrepeating number.

But how was this irrational number discovered, and after thousands of years of being studied, does this number still have any secrets? From the number's ancient origins to its murky future, here are some of the most surprising facts about pi. [The 9 Most Massive Numbers in Existence]

Number enthusiasts have memorized many digits of pi. Many people use memory aids, such as mnemonic techniques known as piphilology, to help them remember. Often, they use poems written in Pilish (in which the number of letters in each word corresponds to a digit of pi), such as this excerpt:

How I want a drink, alcoholic of course, after the heavy lectures involving quantum mechanics.

Now I fall, a tired suburbian in liquid under the trees,

Drifting alongside forests simmering red in the twilight over Europe.

Literary nerds invented a dialect known as Pilish, in which the numbers of letters in successive words match the digits of pi. For example, Mike Keith wrote the book "Not A Wake" (Vinculum Press, 2010) entirely in Pilish:

Because pi is an infinite number, humans will, by definition, never determine every single digit of pi. However, the number of decimal places calculated has grown exponentially since pi's first use. The Babylonians thought the fraction 3 1/8 was good enough in 2000 B.C., while the ancient Chinese and the writers of the Old Testament (Kings 7:23) seemed perfectly happy to use the integer 3. But by 1665, Sir Isaac Newton had calculated pi to 16 decimal places. By 1719, French mathematician Thomas Fantet de Lagny had calculated 127 decimal places, according to "A History of Pi" (St. Martin's Press, 1976). [The Most Massive Numbers in Existence]

Those who are hoping to calculate pi using an old-fashioned technique can accomplish the task using a ruler, a can and a piece of string, or a protractor and a pencil. The downside of the can method is that it requires a can that is actually round, and the accuracy is limited by how well a person can loop string around its circumference. Similarly, drawing a circle with a protractor and then measuring its diameter or radius with a ruler involves a fair amount of dexterity and precision.

A more precise option is to use geometry. Break up a circle into multiple segments (such as eight or 10 pizza slices). Then, calculate the length of a straight line that would turn the slice into an isosceles triangle, which has two sides of equal length. Adding up all the sides yields a rough approximation for pi. The more slices you create, the more accurate the approximation of pi will be.

The ancient Babylonians knew of pi's existence nearly 4,000 years ago. A Babylonian tablet from between 1900 B.C. and 1680 B.C. calculates pi as 3.125, and the Rhind Mathematical Papyrus of 1650 B.C., a famous Egyptian mathematical document, lists a value of 3.1605. The King James Bible (I Kings 7:23) gives an approximation of pi in cubits, an archaic unit of length corresponding to the length of the forearm from the elbow to the middle finger tip (estimated at about 18 inches, or 46 centimeters), according to the University of Wisconsin-Green Bay. The Greek mathematician Archimedes (287-212 B.C.) approximated pi using the Pythagorean theorem, a geometric relationship between the length of a triangle's sides and the area of the polygons inside and outside of circles.

The irrational number rocketed to fame when Swiss polymath Leonhard Euler used it in 1737 in his disquisitions on trigonometry. But it didn't get its pithier, Greek-symbol name from Euler. The first mention of pi as such occurred in a book by a lesser-known mathematician, William Jones, who used it in 1706 in his book "Synopsis Palmariorum Matheseos." Jones likely used the symbol for pi to denote the periphery of a circle, according to the book "A History of Pi," (St. Martin's Press, 1976).

Pi is definitely weird, but is it normal? Though mathematicians have plumbed many of the mysteries of this irrational number, there are still some unanswered questions.

Mathematicians still don't know whether pi belongs in the club of so-called normal numbers — or numbers that have the same frequency of all the digits — meaning that 0 through 9 each occur 10 percent of the time, according to Trueb's website pi2e.ch. In a paper published Nov. 30, 2016, in the preprint journal arXiv, Trueb calculated that, at least based on the first 2.24 trillion digits, the frequency of the numbers 0 through 9 suggest pi is normal. Of course, given that pi has an infinite number of digits, the only way to show this for sure is to create an airtight math proof. So far, proofs for this most famous of irrational numbers has eluded scientists, though they have come up with some bounds on the properties and distribution of its digits.

While scientists don't know whether pi is normal, they have a better understanding of its other traits. Eighteen-century mathematician Johann Heinrich Lambert proved pi's irrationality by expressing the tangent of x using a continued fraction.

Later, mathematicians showed that pi was also transcendental. In math terminology, transcendental means the number can't be the solution to any polynomial that has rational number coefficients. In other words, there's no finite, root-finding formula that can be used to calculate pi using rational numbers.

While many mathletes are enamored with pi, there is a resistance movement growing. Some argue that pi is a derived quantity, and that the value tau (equal to twice pi) is a more intuitive irrational number.

Tau directly relates the circumference to the radius, which is a more mathematically consequential value, Michael Hartl, author of the "Tau Manifesto," previously told Live Science. Tau also works better in trigonometric calculations, so that tau/4 radians corresponds to an angle that sweeps a quarter of a circle, for instance.

There wasn’t always a Pi Day (filled with delectably filled pies, of course). In 1988, physicist Larry Shaw launched the pi-partying day at the San Francisco-based Exploratorium science museum. Every year, on March 14 (3/14) staff and visitors walk a circular parade (and yes the diameter of the circle is like Pi times its circumference), each holding one of the infinite numbers of Pi. But Pi Day didn’t become a national event until 2009, when the House of Representatives passed Resolution 224. The goal? An increased interest in math and science. Let the celebrations begin!