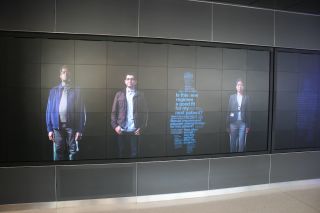 NEW YORK — IBM's Watson may be most famous for winning at the game show "Jeopardy!" but from an office here in Manhattan, the celebrated computer's brains are being used to tackle even bigger challenges.

In a room at IBM offices, software developers and business customers can query the famous computer and see a demonstration of its work as a research partner in fields ranging from land use to medicine.

The room itself has a display wall on one side and a touch screen in the center and near the window. In a recent demonstration of how the machine approaches search queries, Rachel Liddell, a "Watson Experience Leader," used the central touch screen to search through a series of TED talks. [Superintelligent Machines: 7 Robotic Futures]

As she touched the screen to look up lectures on human psychology, Watson created a set of associated topics, such as "education," and touching one of those words generated more specific topics that appeared in the talk. It looked like a Google search, but Liddell said it works very differently.

A Google search uses so-called tags that are matched with certain pieces of content. For example, a TED talk might be tagged with the term education, meaning it will show up in searches for that word.

In Watson's case, the TED talk has a transcript. This means Watson could do a search by simply scanning the text, but there's more to it than that, Liddell said. Watson can also understand synonyms, which is difficult for most computers to do.

"Watson learns the concept a word is associated with," she told Live Science.

Watson can pull this off because it is "trained" to do so — it uses a set of machine-learning algorithms to be taught how to recognize that certain words and concepts go together.

During a recent tour of the IBM facilities, Liddell showed off two areas where this kind of machine learning can help. One is in medicine.

Here in Manhattan, Watson is linked to two hospitals — one in Thailand and another in India — and is used to confirm courses of treatment for cancer patients. Watson doesn't diagnose patients itself, but it does offer certain probabilities that the doctor's recommendation is either the best option or not. Watson might also suggest alternatives, Lidell said.

And this isn't a knock on doctors, Liddell said. For an oncologist, just keeping up with the latest discoveries in oncology would require so many hours of research that it's not realistic for a person to do. Even the most conscientious doctor might miss something helpful, she said.

So, when a doctor at one of the two hospitals decides on a course of treatment (chemotherapy, for example), Watson can comb the medical literature for studies on the type of cancer, and use its ability to process natural language to make sure it covers as much ground as possible. The machine can then suggest other treatments or note which treatment option is probably best by assigning probabilities, Lidell said.

While Watson isn't diagnosing patients yet, IBM has run a test with a case involving a 9-year-old boy with a sore neck and a fever whom doctors were initially unable to diagnose. (The case was featured in a New York Times column, published in 2013, titled "Think Like a Doctor"). There were several possible diagnoses for the boy, ranging from mononucleosis to a neck abscess, reported The New York Times.

Given the information the doctors had, Watson was able to assign a probability to various ailments — some relatively common, others not. Watson made its assessment by combing the medical literature, matching up the boy's symptoms, and from there, assigning a relative probability.

In the actual incident detailed by The New York Times, the child had a rare childhood illness known as Kawasaki disease. The ailment was recognized by a nurse who had seen it before and noted that the boy's eyes were red (the disease irritates the mucous membranes). That led the doctors to examine the child's heart, which provided the "smoking gun" and offered an answer on how to successfully treat the disease.

Another area that Watson has proved valuable is in assessing water usage in Phoenix,  where the company, OmniEarth, gathers data on deeds, house lot sizes and yearly water use. OmniEarth has used Watson's ability to correlate data to compile a map that shows how efficiently homes use their water, and the result can aid city planners, the company said.