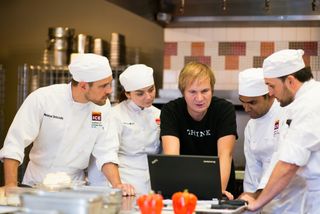 Would you like an Austrian chocolate burrito? Chef Watson has the recipe, which pairs cinnamon, apricots, vanilla and cheese, that the brainy system created based on its training with the Institute of Culinary Education.

IBM's Watson has come a long way since its 2011 victory on the game show "Jeopardy!" Lately, instead of answering trivia in the form of a question, Watson has ventured into the culinary realm, not to mention the medical and veterinary fields. Researchers have also taught Watson how to determine people's personalities on Twitter. Other researchers are using the system to help museums give individualized tours to guests.

To put this cloud-based system's achievements in perspective, computers historically have churned through complex problems by approaching them in a stepwise fashion, following rigid rules and systems that instruct them how to achieve the optimal solution. Watson has heralded in a new era called "cognitive computing," said Steve Abrams, the director of Watson Life. Cognitive computing helps systems sift through big data and learn the best way to approach challenges, from generating a new fish-and-chips recipe to uncovering human proteins important in the formation of certain cancers. [Superintelligent Machines: 7 Robotic Futures]

Watson once took up an entire master bedroom when it debuted in 2011. Now, its system performance has increased by 2,400 percent, and it's the size of three stacked pizza boxes. Here's a look at five of its latest feats.

Watson has created 65 inventive recipes, detailed in the new book, "Cognitive Cooking with Chef Watson" (Sourcebooks, 2015), released yesterday (April 14) after a three-year partnership between IBM and the Institute of Culinary Education in New York City.

Watson combed through thousands of recipes and learned what foods are commonly paired with each other, such as garlic and oregano. "So, it has a statistical idea of what ingredients are typically used together," Abrams told Live Science.

It also learned the underlying chemical composition that give each ingredient its distinctive taste, and figured out new combinations of foodsthat might go well together. Moreover, it learned how people respond to different foods and textures, Abrams said.

"By reading, [Watson] learned what people have already done, and that gives it kind of a base knowledge," Abrams said. "That's what lets it make predictions about what will work, even though we've never put those ingredients together before."

For the savory burrito, a chef came up with the general concept of combining Austrian chocolate with a burrito, and Watson came up with the other ingredients, Abrams said. Other recipes include a Caribbean-style fish-and-chips recipe with red snapper and plantains for chips, and a Swiss Thai asparagus quiche.

Medical research is awash with detailed studies, but the average researcher reads just 23 scientific papers a month, or fewer than 300 a year, Live Science reported in 2014.

To make matters easier, Watson's Discovery Advisor system can read millions of studies, patents, proprietary documents and other information. Then it provides users with knowledge graphs, which are charts detailing how data points connect to each other, Live Science reported.

For instance, Baylor College of Medicine in Houston used Discovery Advisor to pinpoint proteins that modify p53, a protein that is involved in slowing down or preventing tumor growth. Within a matter of weeks, Watson read about 70,000 studies on p53 and identified six other proteins that could modify the protein, Abrams said.

IBM also released Watson Health on Monday (April 13), a new global data health cloud that will allow doctors and researchers to share and analyze health data. IBM is partnering with fitness tracker makers, such as Apple, on a project that will help upload real-time data into the cloud. [5 Crazy Technologies That Are Revolutionizing Biotech]

On any given day, a vet may treat one of any 300 breeds of dog and 70 breeds of cat. In all, they need an encyclopedic knowledge of about 1,500 potential conditions. Watson's cognitive capabilities can make that process easier, Abrams said.

LifeLearn, a company involved with education, marketing and communication tools for veterinarians, has harnessed Watson's system to create Sophie, an application that gives vets fast access to the latest treatments and studies on animal care in Watson's cloud, according to a statement.

Every time people write a tweet or post on an online forum, they're likely revealing hints about their personality, Abrams said. Watson is learning how to find these clues and infer a person's social characteristics and personality.

"Watson is a system that will be interacting with people," whether it be helping someone fill out a form or answering questions online, Abrams said. Until recently, being a machine without emotions made it difficult — OK, nearly impossible — for such a system to figure out a person's personality and how to interact with them.

So, Watson researchers turned to a field called psycholinguistics.

"I can understand quite a bit about your personality simply by paying attention to the choices you make in the language that you use," Abrams said.

By reading about 2,000 words penned by a person, Watson's Personality Insights system can get a good idea about whether a person is outgoing or reserved, for instance. Some companies interested in microadvertising, or targeting ads to different personality types, are using the system, Abrams said.

Imagine going to a museum and listening to an app that tells you about a masterpiece as you near it. It could even answer questions, such as, "What other artists inspired this painter?"

Scientists at IBM Research India are working on such an app. Programmed for Android, the app would harness the power of Watson to guide guests through museums. The researchers presented their work in progress at a conference for intelligent interfaces in Atlanta earlier this month.

Current automated museum guides "render static information," and their lack of "interactivity are major hurdles to ensuring a rich and seamless user experience," the researchers wrote in the summary of their conference presentation.

The app, called Usher, would do three things, they said: sense the visitor's physical location and deliver information about the nearest artwork; provide an interactive question-and-answer service; and alert users whether any of their social media friends are nearby.

Such a program would "enhance the user experience in a museum by multitudes," they said.