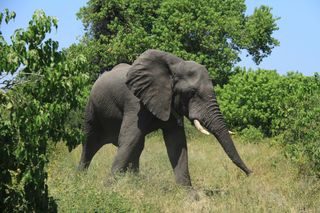 The enormous African elephant doesn't need that much sleep, a new study finds.

After observing two female matriarchs for about a month, researchers learned that the giant pachyderms sleep an average of just 2 hours a day, and often go almost two days without sleep.

A sample size of two is small, but if the two matriarchs are representative of their species, African elephants may be the shortest-sleeping mammals on Earth, the researchers said. [Elephant Images: The Biggest Beasts on Land]

"Elephants really don't sleep all that much, and this appears to be related to their large size," said study lead researcher Paul Manger, a professor in the School of Anatomical Sciences at the University of the Witwatersrand in South Africa. "This confirms a long-held suspicion in the field of comparative sleep studies."

Before studying elephant snoozing times, Manger spent years researching the structure of elephant brains. "During this time, we found some unusual aspects related to the systems that control sleep, suggesting that they [elephants] should be very short sleepers," Manger told Live Science in an email.

Previous studies have described elephant sleep, but many of those studies have flaws — either using captive elephants, which have different sleep schedules than wild elephants, or failing to consistently distinguish between rest and sleep, Manger said. To get accurate results, Manger and his colleagues tagged two wild female African elephants (Loxodonta africana) in Botswana's Chobe National Park.

For the next 35 days, the researchers monitored the elephants, using a special implant that recorded the creatures' trunk movements, as the degree of trunk motion indicates whether the elephant is asleep, the scientists said. Manger noted that the best way to record sleep is by recording brain function, but "this is truly more than difficult [to do in wild elephants], and the surgery to do this would border on the limits of ethical acceptability," he said.

The team also outfitted each elephant with a collar equipped with a GPS and a gyroscope, which helped the scientists determine where and in what position each elephant slept.

The researchers showed that the elephants barely got any shut-eye. Some nights, when the female elephants were seemingly disturbed, they didn't sleep at all, sometimes getting no sleep for up to 46 hours, Manger found.

"These nights without sleep are combined with major movements, up to 30 kilometers [18 miles], and appear to be related to disturbances, such as predation by lions, poaching or a bull elephant in musth [showing highly aggressive behavior]," Manger said. "Interestingly, despite the loss of sleep, the elephants don't show more sleep the next night."

"REM sleep is often associated with the consolidation of memories. However, we do know elephants have good memories," Manger said. "So this finding contradicts one central hypothesis of REM sleep function." [Top 11 Spooky Sleep Disorders]

What's more, the elephants' sleeping and waking hours were not related to light, but rather to environmental conditions, such as temperature and humidity, Manger said.

The findings are important because they suggest that wild African elephants sleep less than captive elephants, which reportedly sleep from 4 to 6 hours per day, the researchers said. Thus, studying wild elephants "supports the notion that sleep needs to be studied in an animal's natural environment if we are truly to understand it," Manger said.

The study was published online yesterday (March 1) in the journal PLOS ONE.