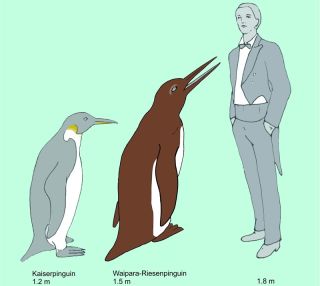 Penguins that walked the Earth 61 million years ago might have been giants, growing to nearly 5 feet tall, according to the oldest penguin fossils unearthed to date. Perhaps even more impressive, these oversize waddlers might have evolved alongside dinosaurs, the researchers report in a new study.

Penguins are flightless, but they can swim at speeds of up to 22 mph (35 km/h). The biggest living penguin, the emperor penguin, can grow to be about 3.9 feet (1.2 meters) tall, but previously unearthed fossils revealed that extinct penguins could get as large as 5.4 feet (1.65 m) tall.

Although penguins are flightless, their anatomy suggests that their ancestors could fly, just as other modern birds can. For example, some wing bones in living penguins are fused together in the same way as those in flying birds, said study co-author Paul Scofield, a paleontologist at the Canterbury Museum in Christchurch, New Zealand. In addition,modern penguins have air sacs in their bodies just as flying birds do, although in flying birds, these air sacs help reduce weight for flight, whereas in penguins, they help the birds control their buoyancy, Scofield told Live Science. [Images: The Emperor Penguins of Antarctica]

The researchers analyzed fossils of leg bones excavated along the Waipara River in New Zealand's Canterbury region. Previous research unearthed many avian fossils there, which got embedded in marine sand about 4 million years after the end of the dinosaur age about 65 million years ago.

"The fossil was found by an amateur collector named Leigh Love," Mayr said, adding that Love has been collecting fossils there for several years and has already made some significant findings.

The scientists discovered that these penguin leg bones were about 61 million years old. They belonged to a bird the same age as the oldest known penguin to date, Waimanu manneringi, Mayr said. Moreover, the newfound penguin reached a size of about 4.9 feet (1.5 m) — nearly as large as the biggest known extinct penguin, Anthropornis nordenskjoeldi, which lived in Antarctica about 45 million to 33 million years ago.

These findings reveal that "penguins reached a giant size very early in their evolution," Mayr said. He added that giant penguins were likely driven extinct by the emergence of marine mammals such as seals and toothed whales.

These newfound 61-million-year-old bones differ significantly from other penguin fossils of the same age. For instance, this new penguin likely had the upright, waddling gait typical of modern penguins, whereas Waimanu manneringi had a more stooped gait.

The new findings suggest that, for ancient penguins to evolve the level of diversity now seen in their body plans, the ancestors of all penguins would have originated millions of years beforehand, likely during the dinosaur age, the researchers said. This contradicts some previous suggestions that penguins diverged from other birds only 62 million years ago.

The newfound penguin is currently unnamed. "We need slightly more material before we can give the species a name," Scofield said. "Hopefully, in the next few years, we'll find more fossils."

Mayr, Scofield and their colleague Vanesa De Pietri of the Canterbury Museum detailed their findings online Feb. 23 in the journal The Science of Nature.