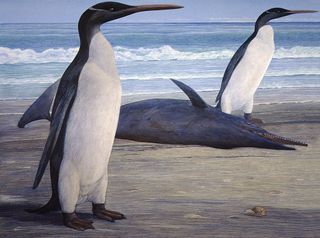 New Zealand was once home to the tallest penguin species ever known — a lanky bird that stood as high as 4.2 feet (1.3 meters).

The penguin, dubbed Kairuku grebneffi, lived about 27 million years ago in a penguin paradise. More of New Zealand was underwater at the time, with only today's mountaintops emerging from the sea. That made for excellent coastal nesting for a number of penguin species.

The new fossil specimens were found beginning in the 1970s, and researchers have continued to turn up bones from the animals as recently as two months ago, said study researcher and North Carolina State University paleontologist Daniel Ksepka. The find expands the known diversity of ancient New Zealand penguins, Ksepka told LiveScience. [Images: Pudgy Penguins]

"In the past we would have thought there were one or two species living in the area," he said. "Now we know there were five."

Ksepka and his colleagues described Kairuku grebneffi and a second species, Kairuku waitaki, today (Feb. 27) in the Journal of Vertebrate Paleontology. K. grebneffi had unusually long flippers and a slim build, though its legs and feet were as short and stumpy as those of penguins today.

Today, penguins tend to cluster in species-specific habitats, with little overlap. Humboldt penguins dominate coastal Peru, for example, while Magellanic penguins are the main species found in Argentina. But researchers are finding that a variety of species lived side-by-side in ancient New Zealand.

Ksepka and his colleagues are using these ancient penguins to study everything from brain evolution to how the animals regulate their temperatures in frigid waters.

"Penguins are so interesting," Ksepka said. "They're so different than other birds that there's a lot we can do in the fossil record to try to understand how they became what they are."