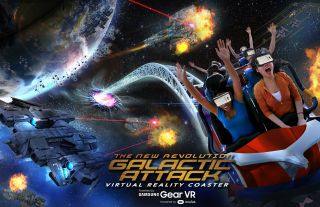 If the swoops and swerves of a regular roller coaster aren't exhilarating enough for you, Six Flags is giving one of its thrill rides a digital twist, offering theme park visitors a new "mixed-reality" experience.

The amusement park has renewed its partnership with Samsung to launch The New Revolution Galactic Attack, a virtual-reality (VR) roller-coaster experience during which riders don Samsung Gear VR headsets (powered by Oculus) for an immersive, "mixed- reality" ride.

The VR roller coasters are debuting this month at Six Flags Magic Mountain, near Los Angeles, and Six Flags Discovery Kingdom, near San Francisco. [Beyond Gaming: 10 Other Fascinating Uses for Virtual-Reality Tech]

While on the ride, users battle an alien drone invasion, and the experience combines the physical ride with an interactive virtual world. Users are then scored based on their gameplay, according to Six Flags.

"As riders drop at high speeds, the mixed reality view changes to a completely immersive, virtual reality environment and a fighter spaceship cockpit materializes and envelops the riders into a tunnel of light," Six Flags officials said in a statement. "After swinging through tight channels, narrowly dodging drones and artillery fire, riders are brought into one of three drone bays, each of which offer a completely different gaming experience and three different endings."

The Galactic Attack gameplay will be experienced via VR headsets on existing coasters at the Six Flags parks — The New Revolution at Magic Mountain and Kong at Discovery Kingdom.