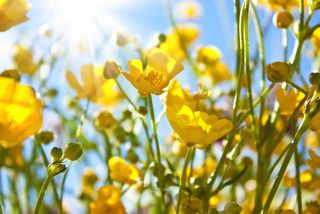 If you've ever played the childhood game of holding a buttercup under your chin to see if you like butter, you might have wondered why the cheery little flowers are the only type that provide the requisite reflection on your skin.

A new study reveals the answer: Buttercups are unique among flowers. Their bright-yellow gloss results from a one-of-a-kind combination of pigments and anatomical structures that create an optical thin film. These films reflect light much like a sheen of oil on a parking-lot puddle, said study leader Casper J. van der Kooi, who studies the reproductive biology of plants and animals at the University of Lausanne in Switzerland.

There are about 500 species of buttercup (the genus name is Ranunculus) found all over the world, van der Kooi said. Their gloss has fascinated researchers for more than 100 years, he said; in preparing the new study, van der Kooi found papers dating back to 1900 about how buttercup color works.

"I've been working on flower color for a few years now, and what you see in the majority of plant species is that they have flowers that have a diffuse reflection, so the reflection is pretty angle-independent. You see a blue or yellow flower from whatever angle you look at," van der Kooi said, citing earlier research he and his colleagues conducted. "The buttercup is a clear exception to this rule because it has a mirror-like reflection."

To study this flower anomaly, van der Kooi and his colleagues analyzed buttercups from meadows around Groningen in the Netherlands. They used photography and scanning electron microscopy to examine the petal anatomy.

What they found was a flower with a structure never seen before. The top layer of the buttercup petal, the epidermal layer, is ultrasmooth and contains pigments that absorb blue light (leaving longer-wavelength yellow light to reflect back to the eye). The epidermal layer is a mere single cell thick, and it's anchored lightly to a starch layer below, the researchers said. Between the epidermal layer and the starch are pockets of air, they added.

The interference between the smooth, single-cell epidermis and the airy layer below is what creates the thin-film effect, van der Kooi said. Wavelengths moving through the different layers interact in such a way to create a shiny, mirror-like effect. Oil slicks and soap bubbles get their shine from the same mechanism, van der Kooi said.

But buttercups also use pigments to great effect, according to van der Kooi. The light that isn't absorbed by the pigments in the epidermal layer, or the light that is bounced back, ends up passing through and hitting the starch layer below the air pockets. This starch layer has a scattering effect, van der Kooi said. The light is scattered back through the pigmented layer, intensifying the yellow color.

"The pigment is used twice, basically," van der Kooi said. It's used once as the light hits the epidermal layer, and then again when the light is scattered back.

Many animal species, particularly birds and butterflies, use thin films to create iridescent or glossy colors, van der Kooi said. So why might buttercups stand out in the plant kingdom as the only ones to possess these structures?

There are a couple of possibilities, van der Kooi said. On sunny days, when the buttercup petals are spread wide to the sky, their glossiness may create a "flash" effect for passing insects, like a mirror reflecting a beam of sunlight. This might make the flowers stand out to pollinators, he said.

The buttercups also might be acting as their own space heaters. On overcast days, the researchers observed that buttercups close into a cup-like shape but also tilt their blossoms to follow what sunlight they can catch. (This is called heliotrophy.) The effect is to reflect light waves not toward the sky, but internally, toward the plant's reproductive organs. This raises the temperature of the blossom's center, which may promote pollen or seed maturation, van der Kooi said. Warm flowers are also preferred by some pollinators.

Ultimately, this basic research may inform conservation strategies in a world where many pollinators, including some bees, are struggling, van der Kooi said. It's also important to understand how such biodiversity in flowers arose, he said.

"The diversity in flower colors is enormous," van der Kooi said. "We try to link this to pollinator vision to understand how pollinators and their vision shaped color diversity as we see it now."

The researchers report their findings today (Feb. 21) in the Journal of the Royal Society Interface.