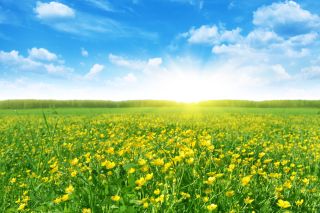 The shape of a flower's petals and leaves are dictated by a biological map hidden inside the flower's growing bud, a new study finds.

Researchers at the John Innes Center and the University of East Anglia, both located in Norwich in the United Kingdom, studied how petals and leaves grow in a type of small flowering plant called Arabidopsis. They discovered that concealed maps within the flower buds are made up of patterns of arrows that act as instructions for how each cell in the bud should grow. As such, the maps essentially influence a flower bud's cell polarity, or the functions of the cells.

The study's findings not only shed light on why geranium petals are unlike rose petals, they also explain why an individual flower's petals and leaves are different shapes.

"The discovery of these hidden polarity maps was a real surprise and provides a simple explanation for how different shapes can be generated," Enrico Coen, a plant biologist at the John Innes Center, said in a statement.

The arrows on the biological maps control so-called PIN proteins, which are molecules located toward the ends of each cell that are essential for the formation of leaves, the researchers explained.

After observing how Arabidopsispetals and leaves grew, Coen and his colleagues used computer simulations to manipulate the PIN molecules and test their ideas of how these maps influence the plant's growth. In their simulations, the scientists made the PIN molecules glow under a microscope, making them easier to see and track.

In a leaf, the pattern of arrows is directed toward the tip of the bud, giving the leaf a more pointed shape. With petals, the arrows appear more fanned out, which explains how flower petals tend to have more rounded ends than leaves, the researchers said.

The study also showed that a gene called Jagged controls the growth of petals. This gene is located in a region of the biological map that interacts with the pattern of arrows, the researchers said.

Part of the reason why petals and leaves are different shapes lies in evolution, because the leaves and petals fulfill different functions, according to the study scientists. Leaves are primarily involved in photosynthesis, capturing light and acquiring sugars to feed the plant. Petals, however, develop later in a plant's life cycle, and are used to attract pollinators, such as bees and butterflies.

The results of the study were published this week in the journal PLOS Biology.