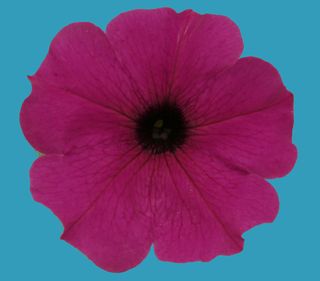 Beautiful and fragrant blue petunias get their unusual color from a molecular defect in the system that controls the acidity of the plants' cells.

A new study reveals this defect in full, solving the decades-long mystery of the flowers' prized color. The quest to understand the blue petunias also revealed a new cellular "pump" in plants that researchers had never seen before. That finding could lead to the manipulation of color in other flowers and to new flavors in fruits, wines and juices, researchers report today (Jan. 2) in the journal Cell Reports.

Most petunias are red or violet, so scientists did not understand why some bloomed blue. Early in the 19th century, researchers tried to explain the color. One theory held that the petals of blue petunias were less acidic, which somehow altered their hue. Another suggested that something was off in the formation of the chemicals that give flowers their color. [Flower Photos: The Beautiful Rose]

"Our current opinion is that both got it right," study researcher Francesca Quattrocchio of the VU-University in Amsterdam said in a statement.

Quattrocchio and her colleagues investigated the molecular makeup of the cells in the petunia petals. Cells move materials across their membranes with the help of tiny pumps; these pumps also enable them to balance their pH, or level of acidity.

Petal cells are known for big differences in pH in various compartments of cells. The new study reveals a previously unknown pump that moves protons, positively charged particles, across membranes. This pump is unlike other cellular pumps in plants, because it allows acidity to build up more than any other type of cell pump, explaining the big pH gradients in petal cells. In blue petunias, the researchers found, genetic defects skew this pumping system so this hyperacidity does not occur.

These genes are likely important in other plants, too, the researchers wrote, and the pumps they code for probably appear outside of petals. Tobacco plants, for example, express these genes in their stems, buds and roots, though the function in those tissues is unknown.

The discovery of the new pumps and their genetic underpinnings could be applied to engineering new flower colors or altering the flavors of fruits. But being blue may not be great for petunias; the color is less likely than red or violet to attract pollinators such as bees, the researchers wrote.