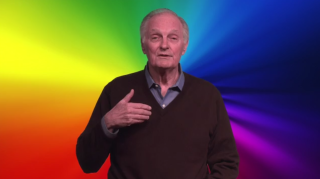 "What is color?" is the question at the center of Alan Alda's Flame Challenge.
(Image: © Valeri Lantz Gefroh | Vimeo)

Actor Alan Alda has a question: "What is color?"

And as part of his annual Flame Challenge, he wants scientists to answer it in a way that an 11-year-old can understand.

Alda is famous for starring in "M*A*S*H" and "The West Wing," but he is also a founding member of the Center for Communicating Science at Stony Brook University in New York. His challenge to scientists started in 2011 with the question "What is flame?" As an 11-year-old, Alda asked his teacher that question and was disappointed with the one-word response, "oxidation." [Easy Answers to the Top 5 Science Questions Kids Ask]

For the latest challenge, the Center for Communicating Science crowdsourced questions from 11-year-olds. Several color-centric questions popped up among more than 800 responses, such as "How does the brain see different colors?" and "How do I know that your blue is my blue?"

The contest organizers were attracted to the question "What is color?" because it can be answered from the standpoint of several different disciplines, from physics to psychology.

Until March 1, 2014, scientists can submit their answers in written, video or graphic formats. After being vetted for scientific accuracy, the entries will be judged by curious 11-year-olds. Two winners — one in the written category and one in the visual class — will win a trip to New York City to meet Alda and get honored at the World Science Festival.

Past winners include Ben Ames, a graduate student in quantum optics, who created a lively animated video to explain where flames come from. Retired engineer Nick Williams, who runs an outreach program for the Lawrence Livermore National Laboratory in California, won in the written category for last year's question "What is time?"

"Communicating science in fun, thought-provoking ways is an important goal for all scientists as we face ongoing concerns about U.S. science education and the future science and technology workforce," Alan Leshner, CEO of the American Association for the Advancement of Science (AAAS), which sponsors the contest, said in a statement. "By rewarding scientists who make science more accessible to everyone, the Flame Challenge is also raising awareness of the importance of science within our society."

More information about how to become and entrant or judge in the contest can be found on the Flame Challenge website.