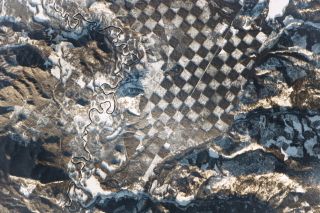 The white square patches show areas of deforestation, where snow has fallen on the now-barren ground.
(Image: © NASA Earth Observatory)

For astronauts aboard the International Space Station, any glance out the window could inspire wonder and awe. One spaceflyer was recently treated to a special sight: a giant checkerboard stretching across part of the planet's surface.

The astronaut did not actually spy a giant board for playing checkers or chess, of course. Rather, patches of deforestation in Idaho created the checked pattern, according to NASA. The white squares show where snow had fallen on deforested ground, while the alternate dark areas show dense forest, the agency said.

Dividing parcels of land in a checkerboard pattern was first agreed upon in in the 1800s, when the U.S. government granted alternate 1-square-mile (2.6 square kilometers) parcels of land to the Northern Pacific Railway according to NASA. [Earth from Above: 101 Stunning Images from Orbit]

"These parcels were later sold off and in many cases harvested for timber. The checkerboard — which has since evolved to the one-quarter-mile [0.4 km] squares shown here — is now seen as a method of maintaining the sustainability of forested tracts while still enabling logging companies to harvest trees," NASA officials at the agency's Earth Observatory wrote in a blog post.

In the image, the checkered pattern is bordered to the left by the Priest River, which winds through the Selkirk Mountains in northern Idaho. Historically, the river was used to transport wood from the logging sites, but in 1968, the U.S. government classified the body of water as a "wild and scenic river" and so it is now protected from development.