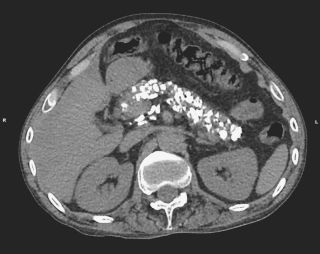 A CT scan showing numerous calcium deposits in the pancreas of a man who drank half a pint of vodka a day for 15 years. Such deposits are often seen in people with chronic pancreatitis.
(Image: © The New England Journal of Medicine ©2017)

A 50-year-old man who drank half a pint (about five shots) of vodka a day for more than a decade developed numerous calcium deposits in his pancreas that made him sick, according to a new report of the case.

The man went to the emergency room after he suddenly began vomiting blood, according to the report. He told doctors that he'd also experienced abdominal pain and diarrhea for the past two months, and reported his daily habit of vodka drinking, which he said he'd been doing for 15 years.

A CT scan of the man's abdomen showed that he had extensive calcium deposits in his pancreas, and he was diagnosed with chronic pancreatitis, a condition in which the pancreas is chronically inflamed.

Although these calcium deposits are often seen in patients with chronic pancreatitis, the degree of calcification seen in this patient is rare, said Dr. Yub Raj Sedhai, an internal medicine resident at Mercy Catholic Medical Center in Darby, Pennsylvania, who treated the patient. [27 Oddest Medical Cases]

Alcohol abuse over many years is the most common cause of chronic pancreatitis, according to the National Institutes of Health. Alcohol can damage cells in the pancreas, and also stimulate these cells to secrete enzymes that destroy the pancreatic tissue, which leads to inflammation, Sedhai said.

"Chronic alcohol use leads to a vicious cycle resulting [in] chronic inflammation of [the] pancreas," Sedhai told Live Science. Calcification of the pancreas happens because calcium gets deposited in the inflamed pancreatic tissue, he said. (Calcium is naturally present in the body, including in the blood stream. But even if your calcium blood levels are normal, the mineral can build up at sites where there is tissue damage, according to Harvard Medical School.)

Because the pancreas makes enzymes that help digest food, people with chronic pancreatitis may be unable to digest food properly, according to the NIH. But replacement pancreatic enzymes are available as prescription and over-the-counter medicines, which can help patients digest food and gain weight, the NIH says.

In this case, the man received pancreatic enzyme supplements and was enrolled in an alcohol abuse rehabilitation program, according to the report, which is published today (Feb. 1) in the New England Journal of Medicine.

People with chronic pancreatitis are advised to avoid drinking alcohol because drinking increases the risk for a relapse of symptoms, according to the NIH.