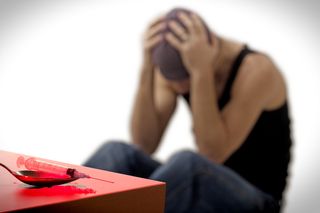 Janina Kean, a substance-abuse and addiction expert, is president and CEO of High Watch Recovery Center, the world's first 12-Step treatment center. Kean led the first Alcoholics Anonymous meeting to be held in China's Yunnan province, within the world's opiate triangle, where she was invited to teach physicians how to properly care for patients with heroin addiction. She contributed this article to LiveScience's Expert Voices: Op-Ed & Insights.

Addiction in the United States is a disease that has been ignored and stigmatized for far too long, and it will continue to be an epidemic thanks to the failures of government, the medical profession and society at large.

According to statistics from the National Center on Addiction and Substance Abuse at Columbia University and the Substance Abuse and Mental Health Services Administration, [1]approximately 40.3 million Americans have the disease of addiction, more than the 27 million who have heart disease, the 25.8 million with diabetes or the 19.4 million with cancer, yet there is a huge disparity in what the United States spends to treat addiction in comparison to each of the other diseases.

With more than 20 percent of U.S. deaths attributed to tobacco , alcohol and other drugs, risky substance use and addiction are the largest preventable — and most costly — public health and medical problems in the nation. In the United States, 95.6 cents of every addiction-related dollar pays for the consequences of addiction — such as crime, hispitalization and care accidents — To have any real impact on reducing addiction in America, more money needs to be invested toward prevention and treatment, before abusive substance use has a chance to become a deadly consequence.

Even with an infusion of capital for treating addiction, the medical profession's ongoing failure to provide adequate education and training in the area of addiction science hamstrings any benefit that would be afforded by additional funds.

In 1956, the American Medical Association declared alcoholism an illness that can, and should, be treated within the medical profession, and in 1989, it declared addiction involving other drugs, including nicotine, to be a disease. Unfortunately, with the disease of addiction, there is a serious gap between evidenced-based treatment and practice — no other disease where proper and useful treatment is available is as overlooked by the health care system.

The root of the problem is twofold. First, most medical professionals who are being sought out to provide treatment are not sufficiently trained or experienced to diagnose or treat addiction. In fact, most of the people providing treatment are not medical professionals or are equipped with the knowledge, skills and/or education necessary to implement a full range of evidence-based services. Therefore, repeatedly, patients seeking treatment are left to turn to a vast array of practitioners predominantly exempt from medical standards.

In the world of addiction science, treatment and prevention, little education is required (or even available). At medical schools, courses in addiction medicine are rarely offered and the content on board exams is minimal at best, oftentimes available only as a subtopic.

For example, as detailed in a report released by California's Senate Office of Oversight and Outcomes this past May, the state's lack of scrutiny allowed unscreened sex offenders, unethical counselors and those with criminal pasts to treat addicts. In the absence of proper screening, this system was fertile ground for improprieties, which horrifyingly included at least 23 registered sex offenders — mostly rapists and child molesters — and "counselors" with DUI or drug convictions who were registered or certified to provide treatment. And Americans expect that an unregulated system that allows this to occur can properly treat our loved ones and reduce addiction in this country?

It is exactly this unfocused and lax attitude toward fighting addiction in the United States that has contributed to much of the stigma felt by, and imposed upon, those suffering from substance-use disorder. Although attitudes are shifting, addiction is a prime example of a disease where public attitudes have yet to catch up with science.

The stigma society imposes upon those suffering from addiction has powerful consequences that work against eliminating the disease, and involves processes of labeling, stereotyping, social rejection, exclusion and extrusion — all essential ingredients of discrimination. These processes negatively affect patients, who feel shunned and ostracised by society for their disease, lowering their self-esteem and increasing feelings of guilt and shame, and ultimately impeding the road to recovery.

The U.S. needs to get serious about fighting addiction — unless the nation invests significant funds for treatment, improving addiction medicine education for physicians and reversing societal stigmas toward those suffering from substance use disorder, this disease, which is treatable, will unnecessarily continue to devastate millions of individuals and families in this country.