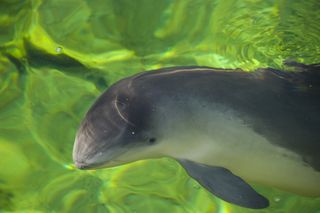 Porpoises are members of the scientific order Cetacea and are related to dolphins, but the two animals are different species. They both have sleek bodies and large flippers. Both are considered brainy creatures and they both have a melon, a structure in the forehead that they use to produce sound waves for navigating their watery homes.

However, porpoises and dolphins differ in several ways. For example, porpoises don't have elongated beaks like dolphins. Also, porpoises have triangular dorsal fins, while dolphins have curved or hook-shaped fins. The exception are finless porpoises. They don't have fins at all. Dolphins' teeth are cone-shaped, while porpoises' teeth are spade-shaped, according to National Oceanic and Atmospheric Administration.

There are six species in three genera of porpoise. As their name implies, Gulf of California harbor porpoises are found around the northern part of the Gulf of California. Black porpoises, also known as Burmeister's porpoise, live off the coasts of eastern and western South America, according to the International Union for Conservation of Nature (IUCN).

The spectacled porpoise likes cold water and has been found all around the world in a zone just north of Antarctica. The common porpoise, or harbor porpoise, also likes cold water, but sticks to the east coast of North America, around southern Greenland, waters off the northern coasts of Scandinavia and off the coasts of Alaska and Japan.

Dall's porpoise sticks to the northern rim of the Pacific Ocean. Some finless porpoises can be found in the Yellow Sea between China and Korea, and around southern Japan, while others swim along the coasts of South Asia.

Some porpoises don't just stay in the ocean. Some swim in rivers and channels, as well, and can handle both salt and fresh waters. For example, the finless porpoises live in coastal waters and rivers along the Indian Ocean and western Pacific Ocean.

Most porpoises are social animals. They live in groups called shoals that can have just a couple members to thousands, according to the Animal Diversity Web (ADW). Dall's porpoise, for example, lives in shoals with two to 20 members, while a harbor porpoise's shoal may have six to 100 members.

Porpoise diets vary, depending on species, but they mostly stick to fish, crustaceans, octopus and squid. They can also be big eaters. The harbor porpoise eats about 10 percent of its body weight each day, according to the National Wildlife Federation.

There isn't a lot known about porpoises in general, and there seems to be a particular lack of knowledge when it comes to the animal's reproductive habits. Since porpoises are mammals, they have live births. The females have a gestation period of 10 to 11 months and give birth to one young at a time. The young are called pups or calves.

Pups are weaned at seven to 24 months of age and are sexually mature around 2 to 8 years of age, depending on the species. Porpoises can live up to 23 years.

Here is the taxonomy of porpoises, according to the Integrated Taxonomic Information System (ITIS):

The harbor porpoises' name is true to its habitat. They like to stay in water that is no deeper than 500 feet (152 m) along the coastline.

Finless porpoises appear to be black, but they are actually grey with bits of blue.