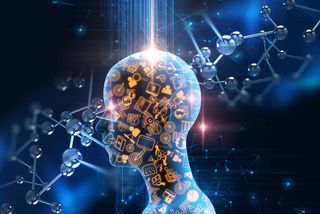 Is human intelligence heading toward a cyborg-dominated future? Elon Musk thinks so.

In a recent tweet, the Tesla and SpaceX CEO teased that a brain-computer system that links human brains to a computer interface — a "neural lace" — may be announced early this year, reported TechCrunch. Musk first mentioned the neural lace concept (the addition of a digital layer of intelligence to the human brain) at Recode’s Code Conference last year. The brain-computer system would create a"symbiosis with machines," Musk said, according to TechCrunch. [Super-Intelligent Machines: 7 Robotic Futures]

"We’re already a cyborg — I mean, you have a digital or partial version of yourself in the form of your emails and your social media and all the things that you do, and you have basically superpowers with your computer and your phone and the applications that are there," Musk said at the conference.

In comparison to computers, Musk said humans' fundamental limitation is input/output. The human output level is incredibly slow — such as using two thumbs to type on a phone — according to Musk, in comparison to the speed at which humans take in information.

"Effectively merging in a symbiotic way with digital intelligence revolves around eliminating the I/O constraint, which would be some sort of direct cortical interface," Musk said.