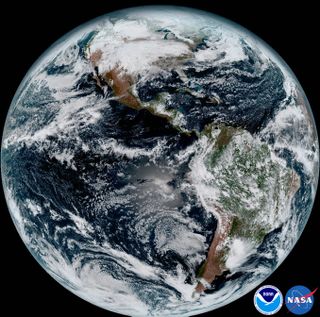 A new weather satellite has relayed its first images of Earth back to scientists, and the new collection, which includes an updated version of the iconic "Blue Marble" image of Earth, is simply stunning.

The satellite, dubbed GOES-16, is designed to snap high-definition images of the continental United States every 5 minutes and the full Earth every 15 minutes, according to the National Oceanic and Atmospheric Administration (NOAA). These photos will help meteorologists monitor weather patterns with greater precision. [See More Spectacular Images From the GOES-16 Satellite]

In its first publicly released set of images, GOES-16 captured the planet in intricate detail. From storm systems over North America to the dust-laiden air from the Sahara over Africa, the satellite is already giving scientists a new perspective of the Earth.

"One of our GOES-16 scientists compared this to seeing a newborn baby's first pictures — it's that exciting for us," Stephen Volz, director of NOAA's Satellite and Information Service, said in a statement.

One of the striking images is a new "Blue Marble" photograph of the Western Hemisphere. The so-called full disk image shows North America and South America and the surrounding oceans with swirling white clouds overhead.

"These images come from the most sophisticated technology ever flown in space to predict severe weather on Earth," Volz said. "The fantastically rich images provide us with our first glimpse of the impact GOES-16 will have on developing lifesaving forecasts."

In May, NOAA is expected to announce the location of GOES-16's geostationary orbit, and by November, the satellite will be operational for weather forecasting, according to agency officials.