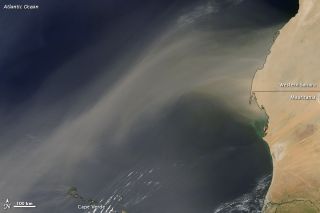 Winds are blowing massive clouds of Saharan dust over the Atlantic Ocean, as shown in this image captured today (Oct. 8) by NASA's Aqua satellite.

Plumes of dust extend from the Western Sahara and Mauritania to the west of the Cape Verde islands . This is the second day winds have whipped up dust storms in the region.

Seas of sand sprawl across Mauritania and the neighboring Sahara desert and Sahel region. The Saharan Air Layer — an arid, dust-laden air mass that forms over the Sahara between late spring and early fall — frequently transports dust westward across the Atlantic Ocean, where hurricanes form. Some of the dust even makes it as far north and west as Bermuda, whose red soils hail from the Sahara.

Many scientists used to think that these clouds of dust helped form hurricanes, but now that conclusion is up in the air; some evidence shows dust storms hinder hurricane formation.

The area surrounding the Cape Verde islands is known to spawn hurricanes, most commonly in August and September. In rare years, such as 1995, a Cape Verde-type hurricane will form in late July or early October, according to the National Hurricane Center.