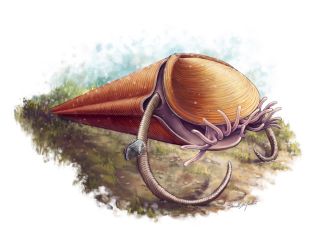 An artist's reconstruction of the hyolith Haplophrentis, with its curved, stilt-like 'helens' propping it above the ocean floor. A mouthful of tentacles, recently discovered in the fossil record, establish this animal as a lophophore.
(Image: © Danielle Dufault. © Royal Ontario Museum)

A strange, ancient creature that stood on stilts has finally found its place in the tree of life.

For 280 million years, strange shelled animals called hyoliths lived on ocean floors around the world. They were one of the many forms of life that appeared during the Cambrian period (543 million to 490 million years ago), when the planet suddenly exploded with all sorts of new — and often odd — species.

Newly discovered fossilized hyoliths that preserve 508-million-year-old soft tissues from these animals reveal that they were part of a group called the Lophophorata, researchers report Jan. 11 in the journal Nature. Animals in this group are distinguished by the tentacles around their mouths. [See Images of Wacky Creatures from the Cambrian Period]

Hyoliths were only about 0.4 inches (1 centimeter) long. They had cone-shaped shells, topped with a shorter, rounder top shell that made them look like ice cream cones with lids. Wait, make that ice cream cones with lids and stilts — odd curved structures, called helens, protruded out between the hyolith's two shells and extended below them like a pair of curved arms. These helens seemed to prop the hyoliths off the seafloor slightly.

The effect was an animal that looked something like a very weird clam, and many researchers thought that hyoliths might, like clams, be mollusks. Others classified them as Incertae sedis, which is more or less Latin for "We don't know."

"The problem is, for the 175 years since they [the hyoliths] were first described, scientists have had little idea of where these organisms actually fit in the tree of life," said Joseph Moysiuk, an invertebrate paleontologist at the University of Toronto.

But unlike scientists before them, Moysiuk and his colleagues had more than 1,500 specimens of hyoliths from the Burgess Shale in the Canadian Rockies and the Spence Shale in Idaho and Utah. Of those specimens, 254 had soft tissue preserved.

"The Burgess Shale is about 508 million years old, which makes these some of the older hyoliths in the fossil record," Moysiuk told Live Science.

A key discovery in the soft tissue was a gull-wing-shaped band of tissue at the hyolith shell opening. Between 12 and 16 tentacles, depending on the specimen, protruded from these tentacles, the researchers reported.

The band pegged hyoliths as lophophores. This group includes brachiopods, which are two-shelled marine organisms that look like clams but aren't mollusks at all. (They have a variety of anatomical differences; for instance, brachiopods have top and bottom shells, whereas clams have left and right shells.) Other lophophores still surviving today include the group called phoronids, or horseshoe worms, which look like little palm trees of the deep: They have tube-like, armored bodies that sprout above the seafloor and end in waving fronds of tentacles that capture passing food particles.

Like today's horseshoe worms, hyoliths were probably filter feeders that didn't get around much, Moysiuk said.

"Its soft tissues don't protrude much beyond its actual shell, and the helens don't seem to be suited for locomotion," he said.

The cool thing about hyoliths, Moysiuk said, is that they seem to blend the characteristics of their living cousins, the brachiopods and the horseshoe worms. They have a top and bottom shell, much like modern brachiopods, but their bodies are tubular, more like horseshoe worms.

"We suggest that hyoliths may be distant cousins of brachiopods who have retained a tubular-shaped body from an ancestor they share with phoronids," Moysiuk said. "It's adding this new branch to the tree of life."