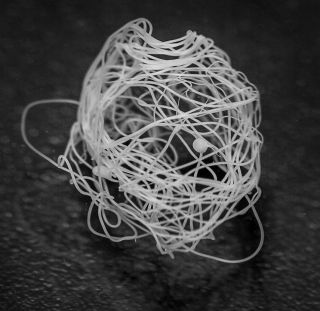 By taking a page from nature, researchers have produced a strong, flexible spider silk that can be produced in large quantities.
(Image: © Lena Holm)

We've built skyscrapers, planes that travel faster than sound and particle colliders a mile below the Earth's surface.

Yet in some ways, the humble little house spider has got humans beat: The silken threads spiders use to ensnare prey are amazing feats of natural engineering. Pound-for-pound, inch-for-inch, spider silk can absorb huge amounts of energy without ripping apart. It's stronger than steel, yet springier than rubber.

Now, scientists have created a synthetic spider silk with many of the same properties as its wild counterpart, and they can produce it on a large scale — overcoming two limitations that have stymied past research in the area. [Amazing Photos of the Artificial Spider Silk]

The hunt for a natural mimic to spider silk is nothing new. For instance, in 2010 the National Science Foundation funded a project to genetically engineer goats to produce spider silk in their milk, while other projects focused on mass-producing spider silk proteins, called "spidroins," in yeast, bacteria and insect cells. In 2015, researchers reported in the journal Biomaterials that they had used spidroins produced by transgenic goats to form scaffolding for growing brain cells. [Biomimicry: 7 Clever Technologies Inspired by Nature]

"Since spiders are territorial and produce small amounts of silk, any industrial application of spider silk requires production of recombinant spidroins and generation of artificial spider silk fibers," the researchers wrote in a paper published Monday (Jan. 9) in the journal Nature Chemical Biology.

However, previously engineered spidroins weren't replicas of those found in wild arachnids. The engineered silk proteins produced in solutions could be produced in disappointingly small quantities at low concentrations; they would clump together; and they didn't stay dissolved in liquids, the researchers reported.

What's more, those ersatz spider silk threads that were produced had lackluster physical properties unless they were treated extensively after initial creation, the researchers wrote.

It turns out that spiders naturally produce silk in silk-spinning ducts, and that the pH (how acidic a substance is) along that gland gradually varied from about 7.6 (slightly basic, meaning there were more negatively charged ions present) to less than 5.7 (acidic, meaning there were more positively charged ions present). This shift in pH pushes the proteins to change shape at their ends, causing the proteins to self-assemble like a lock-and-trigger, according to a 2014 study in the journal PLOS Biology. At the same time, the duct, which at the top looks a bit like a slightly less-wrinkled brain, narrows into a thin tube, and the sheer force of going through the tube pulls the fibers into strands, the researchers found.

The team wondered whether mimicking the conditions in the spider's own silk glands might produce better results. They also noticed that portions of naturally occurring spider silk proteins from different species of spiders had a different pH and ability to dissolve.

So, the researchers combined spidroin genes from two spider species to create a hybrid spider silk gene called NT2RepCT. The NT2RepCT coded for a completely new protein that combined the best properties from the spidroins of the two species: high solubility and high sensitivity to pH. They then inserted the gene for the hybrid silk protein into the DNA of bacteria, which produced the proteins.

In the end, this process produced a highly concentrated solution of spider silk proteins that looked cloudy and viscous, just as real spider silk proteins do inside the silk glands. They then pumped this solution through a thin glass capillary, which mimicked the shearing that produced spider silk fiber in the real world, the researchers wrote in the paper. This process produced 3,280 feet (1,000 meters) of fiber in a 0.26 gallon (1 liter) flask, the researchers reported.

"The as-spun NT2RepCT fibers had a qualitatively similar stress-strain behavior to native spider silk in that they displayed an initial elastic phase up until a yielding point," after which the silk began to deform, the researchers wrote in the paper.

Also, while the synthetic spider silk acted much like the real thing, it had lower toughness and tensile strength than its natural counterpart, meaning it breaks more easily.

"One possible way to increase the toughness could be to spin NT2RepCT fibers with diameters closer to that of native dragline silk, as this apparently has an impact on the mechanical properties of silk fibers," the researchers wrote.