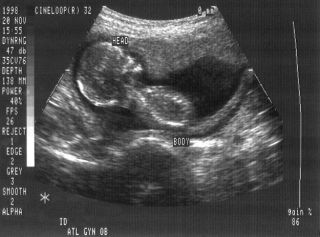 When times are tough, women tend naturally to abort a higher percentage of male fetuses. Researchers call it culling, but they don't know why it occurs.

This much is known: During times of social or economic stress, a woman's liver tends produces more of a hormone called cortisol that proves so damaging to male fetuses they actually kick out in response to it.

Female fetuses, more vital on the whole, seem relatively unaffected by the cortisol.

One theory states that damage to male fetuses is a side effect of this hormonal stress response.

But in a new study, researchers provide evidence for the other theory, that the body is purposely culling the males by pumping out cortisol in an effort to get rid of a child-to-be that is less likely to survive the presumably difficult situation outside the womb.

The key to the research is this: Male embryos and fetuses are known to be weaker. So trying to bring a boy into this world under hardship would be disadvantageous, in terms of survival of the fittest, compared to having a girl.

Ralph Catalano and Tim Bruckner at the University of California, Berkeley, examined records of Swedes born between 1751 and 1912 to see under what conditions they came into the world and how long they lived.

(Sweden is known for a long history of detailed records on births, and the country also experienced famines and severe economic and social strain from a combination of harsh climate and frequent wars prior to the past century.)

The researchers had to go this far back in the records to survey a population that has, for the most part, passed on.

Those born during bad economic times and other periods of high stress—male or female—actually had longer life spans, "suggesting the weaker among them were removed" in the fetal stage, Catalano explained in a telephone interview.

And since more of the males would naturally have been week, slamming them with the hormone would be a biologically beneficial way of quickly preparing the mother for another pregnancy instead of possibly wasting time on a birth that would not produce an ideally healthy child.

For years, scientists have debated whether the decline in male birth rates compared to females during tough times was a byproduct of how a woman's body reacts to stress, or if the stress reaction evolved specifically for the purpose of culling males by changing the standard for survival in the womb.

Catalano said the new results—the first to look at life span of those who were not culled—suggest the hormonal reaction to stress was retained by women specifically because it increases the chances their genes will be passed on to subsequent generations.

The work is detailed in Monday's online edition of the Proceedings of the National Academy of Sciences.