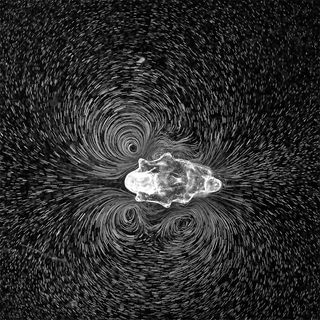 Stanford researchers revealed that starfish larvae have evolved a mechanism that can either stir the water to bring food closer or propel the organism toward better feeding grounds.
(Image: © Prakash Lab, Stanford University)

Before starfish grow into their many-armed and largely stationary adult forms, they navigate the sea as miniscule larvae — measuring about 1 millimeter in length, or about the size of a grain of rice — and propel themselves with 100,000 tiny hairs called cilia that ring their bodies.

But those hardworking cilia are doing much more than just helping the larvae paddle along, scientists recently discovered.

Using high-speed video cameras, researchers found that swimming larvae were also using their cilia to generate miniature whirlpools, which caught nearby algae prey and pushed them closer to the hungry swimmers. This highly efficient hunting behavior was previously unknown in starfish larvae, and suggests that the uses of cilia in marine invertebrates are far more complex than once thought, the scientists wrote in a new study. [What in the Whirled? Starfish Larvae Stir Up Algae Dinner | Video]

Freely swimming starfish larvae don't look much like adults — they have tiny, see-through bodies with only the budding beginnings of what will later become arms. The study authors decided to look more closely at these very young forms, to better understand starfish larvae's unusual bodies and how they use them — "how physics shapes life," study co-author Manu Prakash, an assistant professor of bioengineering at Stanford University in California, said in a statement.

A microscope's magnifying lens had already revealed that starfish larvae's thousands of cilia are arranged in patterns, and those cilia move in a range of synchronized motions that help larvae advance, retreat or change direction.

But the researchers discovered another type of cilia movement that was beautiful but puzzling.

When groups of cilia moved in opposition to a larva's swimming direction, a small vortex would form. The study authors were able to see the water movement by seeding it with particles that they illuminated against a black background, and then they captured the movement with a high-speed video camera. Traced by the glowing particles, multiple whirlpools were visible around the larvae's bodies.

But what was the purpose of the swirling movement? Churning up all these whirlpools required spending a lot of energy, and the scientists wondered how that might benefit the larvae.

Further observations revealed that when the larvae were someplace where there were plenty of algae, they cranked up the whirlpools, creating currents that delivered algae to the hungry creatures, even from a distance that was several times the larvae's body length. Once the food supply was depleted, the larvae swam away.

But producing a highly efficient conveyer belt for food comes with a cost. A larva churning its cilia to suck algae closer would be swimming more slowly and would be broadcasting its position in the water, making it more likely to be snapped up by a predator, the researchers noted.

While the larvae's hypnotic water swirls are mesmerizing to watch — the video recently won first prize in the Nikon Small World in Motion Photomicrophotography Competition — they also serve a very specific purpose, the researchers discovered. Their findings also hint that cilia, which are common in other tiny invertebrates, might be used in similar ways to help them survive, according to the study's lead author William Gilpin, a postdoctoral student at Stanford's Prakash Lab, where the research was performed.

The findings were published online Dec. 19 in the journal Nature Physics.