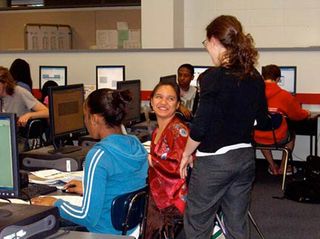 Julia Barnathan (standing), curriculum developer for Northwestern's Office of STEM Education Partnerships, assists a student with a lesson in radiation that uses iLabs to access a geiger counter at the University of Queensland, Australia.
(Image: © Amanda Morris, Office for Research, Northwestern University)

This Behind the Scenes article was provided to LiveScience in partnership with the National Science Foundation. Fifty years ago, a typical high school science fair featured several exploding volcanoes. Today, one would expect a science fair to look far more advanced. The sad truth, however, is that standard high school science has changed very little.

"There is a growing gap between the practice of science the way researchers at Northwestern and other institutions are conducting it and what science looks like in high school," said Kemi Jona, research associate professor and director of the Office of Science, Technology, Engineering and Math Education Partnerships (OSEP) at Northwestern University. "And that gap keeps getting bigger and bigger."

To help close this gap, Jona and his partners at MIT received a $1 million grant from the National Science Foundation to take the concept of online laboratories, or iLabs, and put them into high schools.

iLabs are experimental facilities that can be accessed through the Internet, allowing students to complete experiments from anywhere at any time via a webcam and remote controls. But the labs are not to be confused with the virtual world. The high-tech equipment is real and yields real scientific data.

"Students are always online and very tech-savvy now," Jona said. "So the fact that they don't get to touch the device doesn't faze them at all."

While iLabs are currently being used by large research institutions and universities as a way to share expensive scientific equipment, Northwestern is the first to make these remote labs accessible in high schools.

Jona cites the example of the Large Hadron Collider in Switzerland, which is the world's largest and highest-energy particle accelerator. "Scientists everywhere are able to run experiments, collect data from the collider, and then analyze it without actually going there," he said. "Sharing it for educational purposes is the piece where we're really out in front.'

To integrate iLabs into regular high school science curricula, Jona hopes to turn the website into a hub where students and educators can go to find, share, and access facilities, similar to an eBay-type marketplace.

Right now, the nine instruments available on the site include an inverted pendulum at the University of Queensland in Australia and several at MIT: a microelectronics device characterization lab, a dynamic signal analyzer, an educational laboratory virtual instrumentation suite, a polymer crystallization experiment, a shake table, a heat exchanger, a force on a dipole lab, and neutron spectroscopy labs.

Jona says that Northwestern will put some of its devices online starting this year and will conduct a formal pilot test of iLabs in fall 2009 with teachers and students around the country.

Of course, returning to the earliest stages of the universe with the Large Hadron Collider is a concept that students probably will never get to in any high school. But Jona has begun testing more appropriate instruments in the class of Mark Vondracek, who teaches advanced physics in Illinois. His class was able to use iLabs to access a Geiger counter and measure a radioactive source at the University of Queensland to complete an experiment in radioactivity.

"The fact that you can control it from 8,000 miles away is cool," Vondracek said. "You can't do true science within a classroom environment anyhow. Nowadays people don’t have the time or the facilities or the equipment." Vondracek hopes that once iLabs are made a more permanent part of the classroom, they will help students learn to think more like scientists.

Jona hopes that iLabs will help close the gap between schools with many facilities to share and those with less to work with. He is bringing iLabs to the Chicago Public School system and other school districts that lack resources.

"My vision is to level the playing field in terms of providing better and more equal access for students regardless of where they live. For example, there’s already some work going on with iLabs in Africa where there really are few resources available," he said. "Ultimately, I hope to create a worldwide resource that brings more students into science and scientific careers."