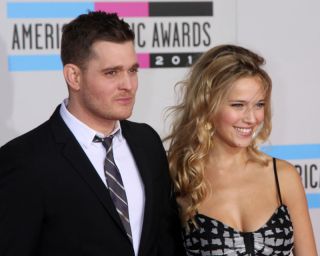 Michael Buble and his wife in 2010 at the American Music Awards
(Image: © Helga Esteb | Shutterstock)

This week, Bublé's sister-in-law said that Noah, who is 3 years old, was diagnosed with liver cancer and that he's started a chemotherapy treatment that is expected to take four months, according to the Argentine magazine Gente. Bublé and his wife, Argentine actress Luisana Lopilato, initially revealed their son's cancer diagnosis in a Facebook post on Nov. 4 but did not specify the type of cancer.

The main type of liver cancer that occurs in young children is hepatoblastoma, which typically develops in infants and children younger than 5, according to the Children's Hospital of Philadelphia (CHOP). This cancer is rare; it affects about 1 to 2 out of every 1 million children, and there are about 100 cases of hepatoblastoma diagnosed in the United States each year, according to a paper published in 2000 in the journal The Oncologist.

Researchers don't know what causes the cancer, but it occurs more often in children born prematurely with a very low birth weight, CHOP says. (It's not clear whether Bublé's son fit these characteristics.) [10 Celebrities with Chronic Illnesses]

This type of cancer is "remarkably responsive" to chemotherapy, according to Boston Children's Hospital. But in extreme cases, a liver transplant may be needed.

The survival rate for children with hepatoblastoma whose cancer is confined to the liver and can be completely removed with surgery is higher than 80 percent, according to St. Jude Children's Research Hospital in Memphis, Tennessee. However, among children whose cancer affects the entire liver, or has spread outside the liver, between 20 and 70 percent survive five years after diagnosis, St. Jude says.

In his Facebook post, Bublé said he and his wife were "devastated" by the diagnosis and that they had put their careers on hold. "We have a long journey in front of us and hope that with the support of family, friends and fans around the world, we will win this battle, God willing," Bublé wrote.