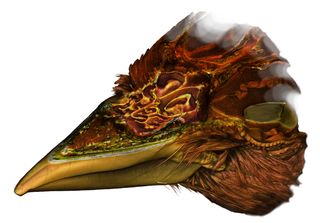 The image reveals the conchae inside the nasal cavity of a song sparrow, taken from a 3D reconstruction built on enhanced-contrast micro-CT scans.
(Image: © Eric Gulson and Mary Margaret Ferraro )

Whether stubby, slender, spoon-shaped, flattened or sharply pointed, bird beaks can be highly specialized, and now, researchers have found that some even have built-in AC.

For the first time, scientists were able to image tiny structures inside nasal cavities in song sparrow beaks. These structures function like air conditioning units, cooling airflow during breathing and helping to reclaim moisture in dry habitats.

Previous studies have examined the role that beaks' sizes and shapes play in regulating birds' body temperatures, and how certain bill types are linked to particular climates. But far less was known about how beaks' internal structures were involved, the study authors wrote. [Images: How the Bird Beak Evolved]

The scientists looked at a type of nasal cavity structure called "conchae" — narrow scrolls of bone that regulate air intake. They suspected that conchae evolved in birds to meet specific conditions within the animals' ecosystems, and that the structure's evolution would influence a beak's size and shape, according to study co-author Raymond Danner, an assistant professor in the Department of Biology and Marine Biology at the University of North Carolina, Wilmington.

Computed tomography (CT) scans enabled Danner and his colleagues to image conchae in two North American song sparrow subspecies — one that lives in a dry habitat and one that lives in a moist one. The scans captured the birds' conchae in unprecedented detail, revealing structures that the scientists "had never seen or even imagined," Danner said in a statement.

They found that the larger-billed subspecies that lived in the drier climate had conchae with a bigger surface area, which could allow more water to condense when the bird exhaled, helping the bird to conserve moisture and to cool airflow during breathing. The larger surface area may also help the bird to disperse heat, the researchers added.

This is the first evidence that nasal cavities can vary greatly within the same bird species that inhabit different climates, the study authors wrote. And this analysis simply wouldn't have been possible with earlier generations of scanning technology, Danner said.

"The contrast-enhanced micro-CT scan technology was essential for us to visualize, measure and compare the morphology of these relatively small and complex structures," he told Live Science.

Many birds have high metabolic rates, and maintain high body temperatures. Piecing together all the adaptations that they use to keep cool and maintain water balance is a vital part of interpreting how they interact with their environments, and this research provides valuable evidence that nasal cavity structures have adapted to local climates, Danner explained.

The findings were published online today (Nov. 9) in the journal The Auk: Ornithological Advances.