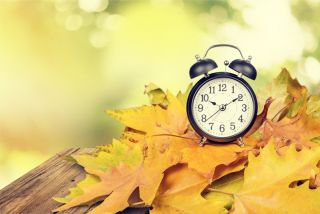 Set that clock back an hour!
(Image: © Billion Photos | Shutterstock.com)

Be prepared to "fall back" early Sunday morning, as people across the United States gain an hour of sleep with the end of daylight saving time.

The switch happens Nov. 6 at 2 a.m. local daylight time. Most devices connected wirelessly to the internet will automatically "fall back" to 1 a.m. local standard time, but don't forget to change any clocks that need a manual change, such as a wall or microwave clock.

Most people are asleep at 2 a.m., which is precisely why the government set it as the designated time to end daylight saving, Live Science reported in 2012. If it occurred during the daytime or evening, the time alteration would likely catch people and businesses off guard, disrupting activities. [Daylight Saving Time 2016: A Guide to the When, Why, What and How]

It would also be confusing to change the clocks at midnight back to 11 p.m., because that would change not only the time, but also the day, Live Science reported.

Once daylight saving (not "savings," as many people say) time ends, most Americans will stay on standard time until March 12, 2017.

The idea for changing the clocks is traced to Benjamin Franklin, who reckoned that people could conserve energy and revel in an extra hour of daylight if they moved their clocks forward in the spring, according to David Prerau, author of "Seize the Daylight: The Curious and Contentious Story of Daylight Saving Time" (Thunder's Mouth Press, 2005), as reported by Live Science.

However, the United States didn't implement the clock modification as a way to save fuel until May 1916, in the midst of World War I. But it's unclear whether daylight saving really does save energy, according to several studies, including a 2007 Department of Energy study and a 1997 study on a residential home in Kansas, Live Science reported.

Moreover, daylight saving time comes with its fair share of challenges. The number of heart attacks increases by more than 20 percent on the Monday after daylight saving time begins in the spring, compared with daily averages for the weeks surrounding the time change, a 2014 study in the journal Open Heart found.

But the weekly heart attack totals didn't change week to week, so it's likely that these people were going to have heart attacks anyway; they just happened to have them earlier than usual because of the time change in the spring, the study's senior researcher, Dr. Hitinder Gurm, an interventional cardiologist and an associate professor of internal medicine at the University of Michigan Health System, told Live Science in 2015.

In addition, pets may be confused by the time change, especially if it changes the hour they're fed, Live Science reported in 2011.