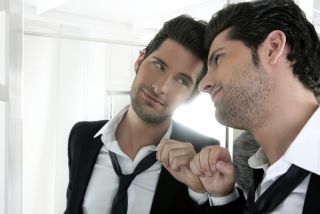 Paradoxically, you could boost self-control by being less self-centered, a new brain study suggests.

Self-control, the ability to resist that second chocolate-chip cookie or save up for a rainy day, may be affected not only by how impulsive people are, but also by how easily people see things from another's perspective, the research finds.

Though the findings may be counterintuitive at first glance, they shouldn't be, said study co-author Christian Ruff, a behavioral neuroscientist at the University of Zurich in Switzerland.

"It's not that surprising when you consider you can see yourself as another person in the future," Ruff told Live Science.

In other words, people who exercise self-control can better imagine how their future self would respond, and therefore have a greater ability to put off gratifying the self in the here and now. [25 Weird Things People Do Every Day, and Why]

In recent years, scientists have hotly debated exactly how people develop self-control. A slate of studies has debunked the notion of ego depletion, which says that people use up a finite supply of self-control by exercising willpower. Instead, researchers have found that willpower is more like a muscle that gets stronger when exercised.

People with greater self-control also have more efficient brain processes, according to a 2013 study published in the journal Nature Communications. And still other studies suggest that self-control is contagious, with social influences determining a person's level of restraint or impulsivity.

"People are very interested in this ability to control yourself, because it's highly relevant for everyday behaviors in life that are important for health and well-being," Ruff said.

But self-control is also implicated in a host of brain disorders, such as addiction. Until recently, however, most people thought the lack of self-control exhibited by those with addictions was mainly due to an inability to suppress impulses, a process governed by the brain's prefrontal cortex.

However, a past study published in 2009 the journal Judgment and Decision Making showed that delaying gratification required taking the perspective of the future self, who may be almost a stranger to the current self, the researchers wrote in the paper. Because of that, Ruff and his colleagues wondered whether a brain region called the posterior temporo-parietal junction (pTPJ), which plays a role in the ability to see things from another person's perspective, might also be important in self-control.

What's good for future you

So the team conducted two sets of experiments. In one, volunteers were offered either a variable reward equivalent to between $75 and $155 that they could hog for themselves or $150 that they could split equally with someone else — their closest friends and partners, casual acquaintances, or total strangers. In these types of experiments, most everyone is willing to take a smaller cut for themselves to help those closest to them, while people are stingier with complete strangers, a process called social discounting, Ruff said.

This study had a twist, however: In one version, the researchers zapped the pTPJ brain region using a noninvasive technique called transcranial magnetic stimulation (TMS), in which a device emits magnetic fields to inhibit the firing of neurons, essentially "shutting off" this region.

In a second set of experiments, people had the option of getting a smaller, variable payoff immediately (ranging from $0 to $160) or a larger, fixed payout of $160 in anywhere from three to 18 months. People were less willing to wait for a payout that was further into the future, a phenomenon known as temporal discounting.

But the results also showed that silencing the pTPJ made people stingier with others and less willing to wait for the reward, the researchers reported Oct. 21 in the journal Science Advances.

Ruff said he and his colleagues suspected that the reason pTPJ played a role in both social and temporal discounting was that it helped people imagine themselves in the future. To confirm this idea, the researchers conducted a third set of experiments; in these tests, they measured people's ability to quickly identify targets seen from a computer avatar's perspective. After controlling for other factors, such as spatial ability, the researchers found that people who had more trouble viewing the scene from their avatars' perspectives were also more likely to be impulsive and less likely to be generous in the social- and temporal-discounting experiments.

The findings suggest that being more other-focused may directly strengthen self-control by improving the ability of a person to predict his or her future self's needs, the researchers reported in the paper.

For instance, most addiction-treatment models focus intensely on training people to squelch their impulses, but it may also be helpful to make sure people struggling with addiction aren't socially isolated, Ruff said.

"If we were trying to really speculate wildly, you could say perhaps there is a bit of a vicious circle," Ruff said. "Once you actually start becoming addicted, you do focus a lot more on your own impulses and feelings and disengage from the social world. This disengagement from having the focus and perspective of others makes it harder to control yourself."