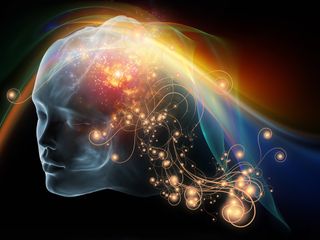 Are "you" just an illusion, a mix of experiences and "stuff" in the universe?
(Image: © agsandrew / Shutterstock.com)

Robert Lawrence Kuhn is the creator, writer and host of "Closer to Truth," a public television series and online resource that features the world's leading thinkers exploring humanity's deepest questions. This essay, the first of a four-part series on the "Self," is based on "Closer to Truth" episodes and videos, produced and directed by Peter Getzels and streamed at closertotruth.com. Kuhn contributed it to Live Science's Expert Voices.

My mom just celebrated her 100th birthday. This once vibrant, eloquent, stylish lady with a sense of pride and a touch of vanity can no longer walk or talk. But she recognizes family, smiles when her great-grandchildren visit or her fingernails are polished, and utters rough phrases of displeasure when caring aides must intervene bodily. She makes an angry face when she senses (quite correctly) that people are talking about her, and she expresses overt frustration at her incapacity to communicate orally by scrunching up her face and balling her fist.

Is she still a "self"? Of course she is. She may not be "her self" — that is, her old self. But though diminished, she is surely a self.

What about her fellow residents in an assisted-living unit specializing in memory impairment? Some have advanced Alzheimer's and can no longer recognize their loved ones. Are they still selves? When does one cease being a self? [10 of the Biggest Mysteries of the Mind]

What is a "self," anyway? What does it mean to be a self? What are the requirements of selfhood?

The nature of self is one of philosophy's perennial and persistent questions. Self is easy to describe, yet maddening to decipher. Part philosophy of the mind, part biology of the brain, it combines two elusive ideas: the philosophy of continuity (how things persist through time) and the biopsychology of psychic unity (how the brain makes us feel singular). I see; I hear; I feel. How do separate perceptions bind together into a continuing, coherent whole? How do sentient properties congeal as "me"?

Look at an old photo, perhaps from primary school. Then look in the mirror. Those two people are the same person. But how so? They don't look the same. Their memories are different. Almost all of the cells that composed that child's body have gone from that adult's body.

I feel myself to be the same person who attended high school, went off to college, started a family and struggled through careers — the same person, until I look in that mirror. Decades roll by. Experiences accumulate. Memories multiply.

Yet I sense myself, inside, all together the same. "I" am always "me." Not just continuity, but unity. Some say my feeling is an illusion.

(All quotes are derived from "Closer to Truth.")

The 18th-century Scottish philosopher David Hume denounced the very notion of a self. Paraphrasing Hume, Searle said, "Whenever I grab my forehead and wonder, 'Where is the self?' all I get is a kind of headache. I feel my hand pushing against my head; I may feel a vague hangover from last night. But in addition to all of my particular experiences, there isn't any self." [The 7 Biggest Mysteries of the Human Body]

To Searle, we can try to define continuity of self — that is, a self that remains even as every other aspect of a person changes — by continuity of body (or of memory, personality, etc.). But we find that none of those criteria suffices, because any or all of them can be altered, even eradicated, and we still sense a continuing, unified self.

"You have to postulate a self to make sense of rational behavior," Searle said. "We want to find a 'soul' that is at the bottom of all this … but, of course, there isn't any."

British philosopher of mind Colin McGinn agrees. To him, our confusion about the self is essentially ignorance about the brain. "The self is something real," he said, but "the self has got to be grounded in the brain — the self's unity over time must be a function of what's in the brain. We don't know how that works, but it must be so."

McGinn stressed that we don't yet have a clear definition of self. "Our grasp of the concept of the self is very limited because we experience it from our first-person point of view when we say 'I,' but we really don't know what that thing ['I'] is at all, except as the bearer of mental states," he said. "Our imaginative adventures with the concept reflect our ignorance about what the self actually is and what constitutes it in the brain."

But McGinn rejected any sort of supernatural entity, which he called "a kind of receding transcendent thing that is capable of strange feats." "People imagine themselves to be capable of all sorts of strange things, supernatural things, where a self can exist independently of the brain," he said. "I'm saying that the self is rooted in the brain. … But we have a really thin conception; it's just the idea of 'I.'"

But how could a conscious self be rooted in a physical brain? By what mechanisms? I can't even imagine what could count as an answer.

Is self an illusion?

Could our internal sense of personal identity — about which we seem so sure — be an illusion? I asked former parapsychologist, now skeptic, Susan Blackmore.

"There's no reason to suppose that we have real continuity," Blackmore said. "Because if you look at what a body and a brain are, there's no room for a thing called a 'self' that sort of sits in there and has experiences. So then, the question becomes, why does it feel that way?"

To Blackmore, we invent that feeling ourselves. "The illusion of continuity is created only when you look for it," she said. Though all things about us change from moment to moment, when we connect all of our experiential dots, we conjure up our inner sense of self. "So you imagine this kind of continuous stream of consciousness when you're awake, but actually, it's not like that at all," she said. "There are multiple parallel things going on. And every so often, we go, 'Oh, that's me,' and we invent the self-story. [Are We Living in a Computer Simulation?]

"This so-called 'me' is really just another reconstruction," she continued. "There was an earlier one 30 minutes ago, and there will be others in the future. But they're really not the same person; they're just stuff happening in the universe."

"So there's no self to die," she concluded, because there is no self prior to death and "there's certainly no self to continue after death."

Sue appears rather cheerful in her inexorable mortality, so I asked if she thinks that "no self" is "good news?"

"I'm smiling because it's so beautiful when you get it," she says. "You can let go and just accept that it's just the universe doing its stuff. It's not me against the world because there really isn't any me at all. Death has no sting, because there never was a 'you' to die. Every moment is just a new story."

To Tufts University philosopher Daniel Dennett, our conception of a self is an illusion created by our experience of the world. He offered an analogy of an object's center of gravity, which is an abstraction, not an actual concrete thing, yet we treat it as something real. "Faced with complex human sentience, we do the same thing: We try to make everything cohere around a single point," Dennett said. "That's the self — the center of narrative gravity.

"What makes a self is a big collection of memories and projects, desires and plans, likes and dislikes — a psychological profile," Dennett continued. "Well, what holds that all together? Opposing processes in the brain, which tend to abhor inconsistency." And so when inconsistencies arise, Dennett said, either you have to jettison the thing that's inconsistent or concoct a coherent story to explain the inconsistency.

How, then, does the self persist through time, notwithstanding all the changes to the body and brain? "The notion that the only thing that could persist is a little, special, unchangeable pearl of self-stuff seems like a fairly lame solution to the problem," Dennett stated. "That's just gift wrapping the problem and pretending to solve it.

"But more to the point, what makes you so sure there has to be an answer to these questions?" he continued. "The conviction that there has to be a single right answer is a leftover from metaphysical absolutism. And we should just dismiss it."

But, sorry Dan, I can't just dismiss it. My sense of self — my inner feeling of personal identity and unity through time — seems so real.

Am I fooling myself?

Next in this four-part series on the self: SELF II: Can Your 'Self' Survive Death?