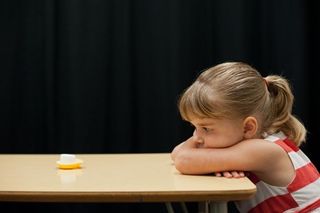 People with greater self-control may have brains that function more efficiently, a new study suggests.

The findings are only correlational, and so they can't tease out whether efficient brains cause the greater self-control. However, the results hint that those with self-control may have extra willpower because it takes them less effort to exert it, said study author Marc Berman, a cognitive neuroscientist at the University of Toronto's Rotman Research Institute at Baycrest.

"If your brain is so efficient you might be able to save resources," Berman said.

The study was published today (Jan. 22) in the journal Nature Communications.

Berman and his colleagues were looking at participants of the famous "marshmallow test" who have been followed since the 1970s. At age 4, they were given a simple choice: eat one marshmallow immediately, or wait 15 minutes and get two. This is a tough task for a 4-year-old, but those who were able to hold out for the additional sweet treat grew up to be markedly different from their marshmallow-gobbling peers. As teenagers, they score higher on the SATs and are less likely to abuse drugs, and as adults, they have lower body mass indices (BMI, or a measure of body fatness), have more money in their bank accounts, and are less likely to get divorced, Berman said. (The differences overall were small.)

"So this one little question with the marshmallow predicted all these behaviors as adults," Berman told LiveScience.

To see how this self-control showed up in the brain, Berman and his colleagues worked with 24 of the 600 or so in the original group, half of whom had shown a lifetime of exerting self-control, while the other half ate the marshmallow immediately and went on to have less self-control in life (they're about 45-years old now). [10 Odd Facts About the Brain]

The team used functional magnetic resonance imaging (fMRI) to scan their brains as they performed a task meant to test whether controlling working memory is key to delaying gratification. After being presented with six words, participants were asked to forget three and then determine if a presented word was one of the remaining words.

While both groups completed the tasks, those with high self-control were more efficient at it. That is, blood flow in the fMRI scans (which indicates brain activity) showed their brain networks used a more direct, simple path to arrive at the answer than the group with lower self-control. The brains of those who had delayed eating the marshmallow all those years ago also looked more similar to each other than did the brains of those with lower self-control.

The results suggest that people whose brains have figured out the most optimal ways of accomplishing tasks are able to exert more self-control, because it takes less effort for them to do so, Berman said.

The findings can't explain how much of either nature or nurture is responsible for this effect, as a lifetime of delaying gratification could dramatically change the brain. To answer that question, the team wants to look at a different group of the original marshmallow kids — those who flipped from delaying gratification at age 4 to not doing so later on, and vice versa, Walter Mischel and Yuichi Shoda, the researchers who originally worked on the marshmallow study, wrote in an email.

"It is critical now to examine those with changing trajectories so that we can probe the factors that underlie such change," they wrote.