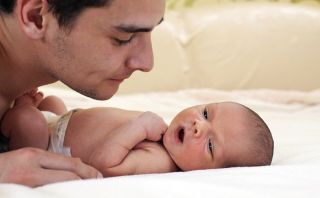 Hormones during infancy are critical for development, with testosterone, for instance, playing a key role in the growth of male reproductive organs. But what factors influence a baby's hormone levels have been uncertain. Now, new research finds the environment a child grows up in is more important than their genes for determining testosterone levels.

Though the researchers didn't identify any specific environmental factors that influenced hormone levels, specifically testosterone, they were able to rule out the infant's genetics by studying identical twins.

No one had studied the causes of testosterone levels in infants before, but an earlier report, in September 2010, indicated that nutrition during infancy (measured by how quickly a baby grows) has an important impact on testosterone levels later in life: Those infants who were better nourished became men with higher sex drives, who were taller and more muscular.

"Testosterone is a key hormone for the development of male reproductive organs, and it is also associated with behavioral traits, such as sexual behavior and aggression," study researcher Richard Tremblay of the University of Montreal, in Canada, said in a statement. This is true in both males and females, though the hormone affects each in different ways.

The researchers analyzed the saliva of 314 pairs of 5-month-old twins (both identical and non-identical) to determine their testosterone levels. Because identical twins share 100 percent of their genes and non-identical twins only share about 50 percent of their genes (similar to any two biological siblings), the researchers are able to determine how big of a role genetics plays in testosterone levels without looking directly at specific genes. [8 Fascinating Facts About Twins]

Results showed no differences in in the amount of variability in testosterone levels between identical and non-identical twins, so the hormone levels probably don't have a genetic component. "Our study is the largest to be undertaken with newborns, and our results contrast with the findings gained by scientists working with adolescents and adults, indicating that testosterone levels are inherited," Tremblay said.

Though they know that environment plays a major role in determining testosterone levels in both boys and girls, the researchers didn't take their study far enough to determine what these environmental factors were.

"The study was not designed to specifically identify these environmental factors which could include a variety of environmental conditions, such as maternal diet, maternal smoking, breast-feeding and parent-child interactions," Tremblay said. "Further studies will be needed to find out exactly what these influencing factors are and to what extent they change from birth to puberty."

This results were published May 7 in the journal Psychoneuroendocrinology.