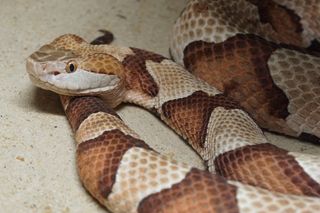 More than 1,300 kids are bitten by snakes each year in the U.S. — and an increasing number of these bites come from the venomous copperhead snake (Agkistrodon contortrix), a new study finds.

In addition, bites from unknown venomous snakes have also increased since 2000, according to the study.

Between 2000 and 2013, there were more than 18,000 reports of snakebites in children in the U.S., the researchers wrote in their study, which was published Oct. 20 in the journal Pediatrics. The majority of these bites occurred in males, and the average age of the kids who were bitten was 10.7 years old. While bites occurred in every month of the year, one-third of all bites took place in June and July, the study found. [The World's 6 Deadliest Snakes]

About half the snakebites that were reported were from venomous snakes, according to the study. Copperhead snakes and rattlesnakes (genus Crotalus) accounted for 70 percent of all of the venomous bites, followed by bites from unknown species (20 percent). Bites from cottonmouths (Agkistrodon piscivorus) accounted for 6 percent of bites, while 3 percent came from coral snakes and 1 percent came from exotic venomous snakes, the researchers found.

Four children died from snakebites during the study period, the researchers found. In three of the cases, the snake was identified as a rattlesnake, and in one case the snake was unidentified, they found.

Encounters with exotic snakes have increased, according to the study. "Fifty years ago, no exotic species were reported," by snakebite victims, the researchers wrote. In recent years, many of these exotic species are increasingly being kept as pets. With the growing popularity of these snakes, "it is reasonable to expect that the calls to poison control centers about exotic snakes will become more common" in the coming years, they wrote.

Although venomous snakebites were reported in every state in the continental U.S., as well as in Washington, D.C., and Puerto Rico, the majority occurred in the South and Southwestern U.S., according to the researchers, who were led by Dr. Joann Schulte, a public health physician and pediatrician at the North Texas Poison Center.

The researchers noted that there can be significant variation in the effects that snakebites cause in children. For example, up to 20 percent of venomous snakebites are "dry," meaning that no venom is injected during the bite. This occurs when a snake has used up all of its venom supply, according to the study.

The amount of venom that is injected during a bite also varies, and the severity of the symptoms can range from mild to life-threatening, according to the study. On the extreme end of the spectrum, bites can lead to severe drops in blood pressure, an inability to think clearly, rapid heart rate and breathing, and bleeding problems.