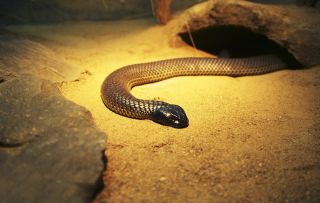 Unlike most venomous snakes, which tend to bite people who are either handling them or who surprise them, the large Australian mulga snake has also been found to attack people who are asleep.

In a new study that examined 27 cases of people bitten by the mulga snake, researchers found that seven of the victims were asleep when they were bitten, between midnight and 5 a.m.

But 10 people who were bitten had encountered a mulga snake unintentionally, and the fact that seven of these victims were bitten while sleeping "is noteworthy since it represents 70 percent of identified cases involving bites without intentional contact, and suggests that bites sustained during sleep may be more common than previously reported," the researchers wrote in their report. [7 Shocking Snake Stories]

The mulga snake is the largest terrestrial venomous snake in Australia. The snake's bites can be fatal; however, the most recent case of a fatal mulga snakebite was reported more than 40 years ago, the researchers wrote.

The majority of the bites in the study occurred between December and March, when the weather in Australia is warmer, the researchers found. Eighty percent of the victims were male.

Snakes don't always inject their venom when they bite, but in the study, 21 patients had symptoms of envenomation, which means they were injected with venom. Bite victims in the study showed bleeding, vomiting, abdominal pain and diarrhea.

"The thing that was surprising about this study was there was a higher-than-expected rate of envenomation," said Dr. Sean Bush, a professor of emergency medicine and a snake venom specialist at East Carolina University, who was not involved in the study. The high envenomation rate may stem from the large size of both the animal and its fangs, Bush said.

The high prevalence of bites inflicted while the people were asleep was also surprising, Bush said, because most snakebites occur when snakes feel threatened and try to defend themselves.

The study authors said it isn't clear why the snakes bit people who were asleep. They speculated that, in one of the cases, "the snake may have been attracted to the victim's body heat," or, in another case, the snake was just initially looking for rodents that might have been attracted by a trash can close to a victim's home.

The study findings were published online on April 13 in the journal Toxicon.