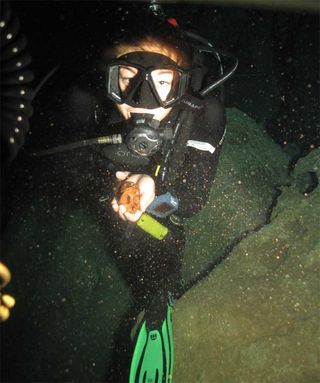 Jessica Keller holds the primate skull found in the Padre Nuestro cave in the Caribbean. Courtesy of Indiana University.

Bones from several Caribbean sloths and a primate skull, possibly from an extinct monkey, have been discovered in a prehistoric water-filled cave in the Dominican Republic, scientists reported today.

The animal bones were found alongside stone tools possibly crafted by humans. The researchers say the treasure trove holds clues to the Caribbean's earliest inhabitants.

"I couldn't believe my eyes as I viewed each of these astonishing discoveries underwater," said lead researcher Charles Beeker, director of Academic Diving and Underwater Science Programs at Indiana University, Bloomington. "The virtually intact extinct faunal skeletons really amazed me, but what may prove to be a fire pit from the first human occupation of the island just seems too good to be true."

The tools, made of basalt and limestone, were likely crafted some time between 6,500 and 4,000 years ago, while the animal bones range in age from 10,000 to 4,000 years old, according to the researchers.

The sloth bones included claws, jawbones and other skeletal remains, which the scientists say belonged to six or seven sloths, including one the size of a black bear and another dog-sized.

The researchers say sloths went extinct in the Caribbean soon after humans arrived.

"I know of no place that has sloths, primates and humanly made stone tools together in a nice, tight association around the same time," said IU's Geoffrey Conrad. "Right now it looks like a potential treasure trove of data to help us sort out the relationship in time between humans and extinct animals in the Greater Antilles."