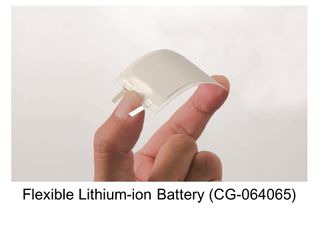 The bendable battery could be used in wearable devices such as smartwatches, fitness bands and smart clothing.
(Image: © Courtesy of Panasonic)

A new bendable lithium-ion battery that can flex and twist could power wearable devices and one day be used to develop a flexible smartphone, according to Panasonic, which is developing the new battery.

Although it's still in the early stages of development, the battery already has been tested to withstand twists, bends and other deformations while maintaining its ability to hold a charge, according to Panasonic. In contrast, a regular lithium-ion battery, commonly used in smartphones and other gadgets, can degrade when it is deformed, thus shortening the device's operating time, the company said.

The battery was unveiled earlier this month during the annual Combined Exhibition of Advanced Technologies (CEATEC), a technology fair held from Oct. 4 to Oct. 7 in Japan. [10 Technologies That Will Transform Your Life]

Lithium-ion batteries can be highly volatile if they malfunction, as was the case with the Samsung Galaxy Note 7, which was plagued by battery problems that caused them to overheat and sometimes explode. Faulty batteries can catch fire when they are overcharged, because the lithium ions can collect in one spot and be deposited as metallic lithium. If this happens, the heat from the overcharging can cause oxygen bubbles to form, which are highly reactive with metallic lithium. If they combine, this can lead to an explosion.

The bendable battery is just 0.02 inches (0.55 millimeters) thick, and was able to withstand being bent so that the curve of the battery has a radius of 25mm, and being twisted up to 25 degrees in tests, according to Panasonic. The company noted that the capacity of these batteries is still small — they can hold a charge between 17.5 mAh (for the smallest size) and 60 mAh (for the largest). For comparison, the iPhone 7 has a 1,960-mAh battery. Though further development is needed before the battery will be ready for use in smartphones, the invention could be suitable for low-power devices such as smart cards or smart clothing, Panasonic said.

"When used in card devices such as smart cards and card keys that work on batteries, as well as body-worn devices and smart clothing, this battery can retain its characteristics even if the device is frequently bent or twisted," the company said in a statement.

Though samples of the battery were on display at the conference and sample shipments are scheduled for the end of the month, Panasonic said mass production will require further product development.