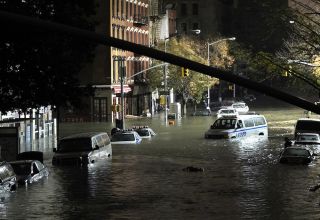 Cars are submerged on the street after severe flooding caused by Hurricane Sandy, on Oct. 29, 2012 in Manhattan, New York.
(Image: © Christos Pathiakis/Getty Images)

Disastrous floods like those seen during Hurricane Sandy in 2012, which killed 159 people in the United States, destroyed neighborhoods in New York and caused an estimated $50 billion in damages, may hit New York City 17 times more often in the next century, a new study finds.

Hurricane Sandy was the second costliest hurricane in U.S. history, according to the National Hurricane Center. The hurricane caused widespread flooding of streets, buildings and subway tunnels in Manhattan after storm surges pushed the East River to overflow its banks.

The storm surge, or storm-linked rise in sea level from Sandy, reached 9.2 feet (2.8 meters) in New York City, and the storm tide — the combined height of the normal ocean tide and the storm surge — reached a record height of 11.3 feet (3.44 meters) there. A better understanding of how often such catastrophic flooding might happen is key to minimizing future damages, the researchers said. [A History of Destruction: 8 Great Hurricanes]

"Your mitigation measures are only as good as your predictions of the threat you're trying to mitigate," study lead author Ning Lin, an assistant professor of civil and environmental engineering at Princeton University, said in a statement. "If you don't account for rising sea level and possible change in storm activity, you're underestimating future flood risk."

"Our model for the first time pulls together probabilistic estimates for sea-level rise and storm surge to produce long-term predictions of flood stages," Lin said in a statement. "These two variables, although largely uncertain, are critical in determining the extent of coastal flooding from future hurricanes."

"We ask, 'What is likely?' and 'What are the extremes?'" study co-author Robert Kopp, an associate professor in the Department of Earth and Planetary Sciences at Rutgers University, said in a statement. "We take into account factors that cause local sea level to vary from global sea level."

The scientists found that from 1800 to 2000, the chances of Sandy-level floods have tripled from once every 1,200 years to once every 400 years due to factors such as the slow sinking of the land in the mid-Atlantic region in response to the end of the last ice age. In addition, based solely on how the rate of sea-level rise is expected to accelerate over the 21st century, the researchers estimated that flooding on a par with Hurricane Sandy would become 4.4 times more likely by the end of this century.

"It was a big change in flood frequency that we found, especially comparing this century to the past two centuries," Lin told Live Science.

Even if the number of strong hurricanes does not increase between now and 2100, sea-level rise alone will likely increase the frequency of Sandy-like events, according to study co-author Ben Horton, a professor in the Department of Marine and Coastal Science at Rutgers University. [Tropical Storms and Hurricanes of 2016 (Photos)]

However, sea-level rise is not the only factor driving Sandy-level flooding. Based on historical climate data and modeling of future climate conditions and storm surges, the scientists found that changes in the size, intensity and tracks of hurricanes may lead to a more limited threefold increase in such flooding, but may also make this kind of flooding 17 times more likely.

"Things are only going to get worse by 2100," Horton said in a statement. "It's just a question of how much worse it will get. There is no happy scenario."

There is still a great deal of controversy over whether hurricanes are becoming more frequent and intense due to climate change. However, these new findings suggest that even if hurricanes occur at the same frequency and strength as they do now, "our estimates suggest the frequency of high storm surges will significantly increase based on rising sea level," Lin said in a statement. "As we refine climate and hurricane dynamic models, we will have more accurate predictions that will allow planners to better design flood mitigation strategies."

"This information is critical for enabling well-informed decisions about the future of this region," Rick Luettich, director of the Institute of Marine Sciences at the University of North Carolina, who did not take part in this study, said in a statement. "One wonders whether this area would have developed into the megacity it is today had its early years occurred under the storm-surge conditions predicted for 2100."

Can these results be extrapolated to other areas? "Yes and no," Lin said. "The extent of sea-level rise will change from place to place — it depends on continental features. But many coastal areas around the Atlantic may see a potential increase in flooding risk."

Future research will examine how much damage these changes might cause and what strategies might best deal with these changes, "such as levees, or barriers, or elevating houses, or retreating," Lin said.

Lin, Kopp, Horton and their colleague Jeffrey Donnelly at the Woods Hole Oceanographic Institution in Massachusetts. detailed their findings online Monday (Oct. 10) in the journal the Proceedings of the National Academy of Sciences.