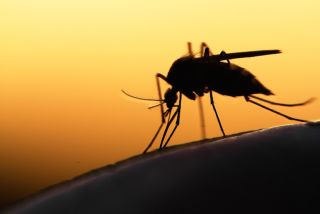 A person in Florida has caught a locally transmitted case of dengue fever, news sources reported Wednesday. The case is the first in which a person caught dengue from a mosquito bite within Miami-Dade County in 2016.

The person diagnosed with the viral infection has received treatment and is expected to fully recover, CBS Miami reported. The case is also Florida's second local dengue case of 2016, according to CBS Miami. In 2015, the state reported one locally transmitted case of dengue, and in 2014 it had six known locally acquiered cases of the disease, according to the Florida Department of Health.

Dengue (pronounced den' gee) is a disease caused by four closely related viruses: DENV 1, DENV 2, DENV 3 and DENV 4, according to the Centers for Disease Control and Prevention (CDC). It's spread when infected mosquitoes — usually the species Aedes aegypti, but sometimes the species A. albopictus — bite humans. [7 Devastating Infectious Diseases]

The virus cannot be spread directly from person to person; it must be carried by a mosquito, according to the CDC.

There are an estimated 100 million cases of dengue worldwide yearly, according to the CDC. Symptoms of the infection include high fever, severe headache, severe pain behind the eyes, joint pain, muscle and bone pain, and rash, the CDC said. Symptoms usually begin within 14 days after a person is bitten, and can last up to one week, CBS Miami reported.

There isn't a specific treatment for dengue, but people with the disease can take pain relievers, such as Tylenol, that contain acetaminophen; drink plenty of fluids; and consult with a physician, according to the CDC. If the person develops severe symptoms, such as vomiting or severe abdominal pain, he or she might have dengue hemorrhagic fever, a potentially fatal disease that can be treated if caught early, according to the CDC.

Officials in Miami-Dade County are working to reduce mosquito populations, and "aggressive mosquito control is being conducted in this county already to address Zika," said Mara Gambineri, the communications director at the Florida Department of Health. In general, to prevent the dengue virus from spreading, people can get rid of standing water where mosquitoes breed, and use window screens and air conditioners to stop the insects from getting inside, according to the CDC. (Mosquitos prefer humidity, and air conditioners make the air inside drier.)

People can also wear long-sleeved shirts, pants and insect repellant to avoid mosquito bites, according to the CDC.

Florida isn't the only state to experience dengue. Hawaii had dengue outbreaks in 2001, 2011 and 2015, and Brownsville, Texas, had an outbreak in 2005. An outbreak in Key West, Florida, stretched from 2009 to 2011, Jonathan Day, a professor of medical entomology at the University of Florida, told Live Science in 2015.

However, there are no animals other than mosquitoes in the United States that can carry dengue, and so effective mosquito control can play a big part in getting rid of the disease, once the human outbreak ends, Day said.

Editor's Note: This story was updated to include more information from the Florida Department of Health.