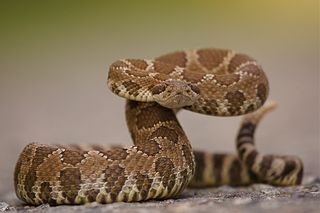 The ancestors of rattlesnakes were equipped with venom that could target muscles, blood and the nerves.
(Image: © Tom Reichner / Shutterstock.com)

The ancestor of today's rattlesnakes was a serpent to be feared: It had genes to make venoms that would target the blood, the muscle and the nervous system.

Today's rattlers, on the other hand, are specialists. The eastern diamondback and the western diamondback both have venom that damages muscles, while the Mojave rattlesnake's toxins target the nerves. Now, researchers have learned that rattlesnake ancestors rapidly deleted genes that made diverse toxins, which resulted in faster-than-usual evolution.

"This wholesale loss is unusual," study researcher Sean Carroll, a professor of molecular biology and genetics at the University of Wisconsin, Madison, said in a statement. "It's not just run-of-the-mill, ordinary variation."

The researchers conducted a genetic analysis to track the loss of various venom genes. Most of the time, evolution works slowly — genes that are no longer used continue to clutter up the genome for ages. But that wasn't the case for the venom genes, the researchers found.

Neurotoxin genes evolved 22 million years ago, predating the evolution of rattlesnakes themselves, the researchers found. Rattlesnakes evolved 12 million to 14 million years ago. Over time, the rattlers lost between two to four venom genes each, compared to their last common ancestor, and all three rattlesnake species currently share two of an original suite of seven genes. [Image Gallery: The Social Life of Rattlesnakes]

The reason for this erasure has to do with how the toxin genes were arranged. The genes were part of a sequence that also contained what's called a "transposable element," Carroll and his colleagues found. Transposable elements are sometimes called "jumping genes" because they can easily move around within the genome. Their ease of movement makes for easy mutations and deletions of protein-coding genes nearby.

"You can envision a really quick and dynamic process in rattlesnakes, where this whole locus (stretch of DNA) is sort of breathing — expanding and contracting," postdoctoral researcher Matt Giorgianni of the University of Wisconsin, Madison, said in the statement. "It really highlights how dynamic this genomic region is and helps put into perspective how quickly these things could happen."

Even individual species of snakes can show variation in venom, study researcher Noah Dowell, also a postdoctoral scientist at the University of Wisconsin, Madison, said in the statement. When the team studied the genomes of four western diamondbacks, they found that one had two extra venom genes.

It's not clear why rattlers decided to ditch their wide variety of chemical weaponry in favor of specialized toxins. They may have been evolving in response to the susceptibility of their prey to various venoms, Carroll said.

"There's good evidence in nature that there is an arms race going on that generally exists between predators and prey," said Carroll. "Those arms races can be pretty intense and not dissimilar to things like antibiotics and bacteria, where you have a really strong, kind of do-or-die selective pressure that can accelerate the pace of evolution and intensify the changes that take place over time."