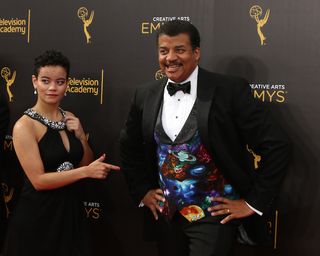 Neil deGrasse Tyson with his daughter Miranda Tyson, who is now much older than the skeptical kindergartener Tyson described her as, at the 2016 Primetime Creative Emmy Awards in Los Angeles, California.
(Image: © Helga Esteb | Shutterstock.com )

It's A-OK to captivate your child with the story of the tooth fairy, right?

"We're not going to lie to them," Tyson said to Corden. "The universe is amazing enough that you don't have to invent stuff just to keep kids entertained." [Easy Answers to the Top 5 Science Questions Kids Ask]

But is that the right way to handle the tooth fairy story? Live Science asked three experts to share their views. Though these experts said they all admired the tack Tyson took, they also noted that there's no one way to address the famous fairy.

During the show, Corden asked Tyson whether his scientific training ever found its way into his home life. Turns out it has: When the scientist's daughter, Miranda, lost her first tooth, in kindergarten, Tyson and his wife told the girl that they had heard that if you put a tooth under a pillow, the tooth fairy visits. Then, they surreptitiously swapped the tooth for money after Miranda went to sleep.

The next morning, Miranda excitedly showed them the prize. That's when they put on their skeptics' hats.

Miranda needed more proof, so she set up fairy booby traps, but they didn't work, Tyson said. Then Miranda told her friends, who suspected, as many little kids do, that the fairy was actually their parents. The children agreed that whoever lost a tooth at school next would neglect to tell her parents, but would still hide that tooth under her pillow to see whether the fairy would come.

When that day came, the kids waited with suspense. But the tooth stayed a tooth.

Tyson said his daughter's experiment made him proud, and he added that he wasn't concerned that his daughter was missing out on the tooth fairy experience.

There's no evidence that telling children that the tooth fairy exists is harmful, and many children have pleasant memories of the tale, said Gail Heyman, a professor of psychology at the University of California, San Diego. However, Tyson's approach is creative because it encourages critical thinking, Heyman said.

"I really like Tyson’s approach, and part of the reason I like it is because I am a researcher and I highly value critical thinking," Heyman said. "Based on what we know about developmental psychology, taking this kind of approach will help children learn to think for themselves." [11 Facts Every Parent Should Know About Their Baby's Brain]

She noted, however, that not all parents value critical thinking at this age. "It certainly can make parenting more challenging, because children who think critically are especially likely to question what their parents tell them," Heyman said.

Heyman said that when she had children, she told them "we were going to play tooth fairy and made it clear that it was a pretend game," she said. "I didn't want them to miss out on the fun, but I also didn't want to lie to them."

"I wonder if he also encourages children to test out the efficacy of prayer in the same way — and how the audience would react if he did so," Harris said.

But most parents don't teach their kids to question the tooth fairy, the experts said. Instead, "in certain families, people go a good distance, meaning they really put in a good effort, to protect a child's misconception," said Melissa Koenig, an associate professor at the Institute of Child Development at the University of Minnesota.

However, there are actually myriad factors that influence a child's belief in mythical beings. In a 2004 study in the journal Developmental Science, researchers made up a new fantastical entity: "the candy witch."

"If you've been perpetuating the Santa Claus myth since birth at Christmastime, that correlation [in the study] suggests that you're making the tooth fairy myth, which comes a little later, a little more believable," said Koenig, who was not involved in the study.