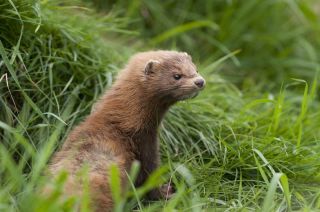 Minks are small mammals with long, thin bodies, short legs, pointed snouts and claws. These soft creatures are related to ermines, ferrets and weasels and look much like their relatives. Their fur is highly valued.

There are two species of minks: European minks and American minks. They were once classified in the same genus, Mustela, but recent research has led to the American mink being classified separately in the Neovison genus, according to the International Union for Conservation of Nature (IUCN).

Minks are found near bodies of water, such as streams, lakes or ponds that have nearby tree cover. They make their homes by digging dens or by living in hollow logs. They often make their dens a little cozier by adding grass, leaves or fur leftover from prey, according to ADW.

Most minks are loners and typically only come together to breed. They are crepuscular, which means they are most active during the dawn and dusk hours, spending their time marking their territory and looking for prey. When they find a potential meal, they bite down on the creature's neck to kill it.

Minks are carnivores, which means they eat meat. Muskrats, chipmunks, mice, rabbits, fish, snakes, frogs and water fowl are all part of the mink's diet. The European mink is also known to eat some vegetation. Leftovers from a kill are often kept in the mink's den for later.

Kits are weaned at 6 to 10 weeks, though how long they stay with their mother depends on the species. American minks become independent at six to 10 months while European minks leave at much younger age, around two-and-a-half to four months, according to ADW. They become sexually mature at 10 to 12 months.

Here is the classification of minks, according to theIntegrated Taxonomic Information System (ITIS):

While the American mink is in no danger of disappearing, the European mink is listed as critically endangered by the IUCN. Half of the population has been lost in the last 10 years, according to IUCN's Red List of Threatened Species. The population is continuing to decline and is estimated to reach an 80 percent loss in the next 10 years.

The mink's coat is coated in oil to repel water.

Minks have webbed feet that help them swim.

The European mink is rarely found more than 328 feet (100 m) away from fresh water, according to IUCN.

The mink's fur is very valuable around the world. Because of this, there are farms that raise minks to harvest their fur.