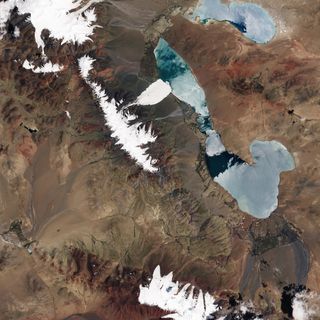 A stunning image from space shows a massage tongue of a glacier that sheared off in July in Tibet.
(Image: © NASA Earth Observatory images by Joshua Stevens, using Landsat data from the U.S. Geological Survey and Sentinel data from the European Space Agency. Special thanks to Simon Gascoin for locating the images. Image interpretation assistance by Andreas Kääb )

One of the world's largest, and most mysterious ice avalanches was recently visualized in stunning pictures from space.

A huge sliver of ice split off from a vast glacier in the Aru Mountains of Tibet, falling nearly 0.6 miles (1 kilometer) before tumbling through a narrow gully and plunging into a nearby lake.

When the ice and rock settled, the avalanche debris spanned 4 square miles (10 square km) and was 98 feet (30 m) thick. The massive avalanche killed nine people, 350 sheep and 110 yaks that lived in the village of Dungru. [See Iconic Images of Earth from Space]

The cataclysmic fall of ice and rock is one of the biggest ever recorded, with only a 2002 avalanche in the southern Russian republic of Ossetia's Kolka glacier dwarfing this one in size.

"This is new territory scientifically," Andreas Kääb, a glaciologist at the University of Oslo, said in a statement. "It is unknown why an entire glacier tongue would shear off like this. We would not have thought this was even possible before Kolka happened."

The dramatic ice slide, called the Rutog avalanche, is baffling, Tian Lide, a glaciologist at the Chinese Academy of Sciences, said in the statement. That's because the ice in the region where the collapse occurred was not steeply angled.

However, there were some clues in satellite images that the glacier was undergoing changes in the weeks before the collapse. The stunning collapse was captured on July 21, 2016, using the European Space Agency's Sentinel Satellite-2. Before that, on June 24, NASA's Operational Land Imager satellite took a similar picture of the region before the Rotug avalanche.

The changes revealed in those pictures provide clues that the glacier was surging, or advancing at 10 to 100 times its usual speed. However, glacial surges don't normally cause such castaclysmic ice slides, Kääb said.

It's possible that the glacial surge led to a cataclysmic ice fall because water beneath the glacier acted as a lubricant. Warmer temperatures can sometimes spur melting in the interior of a glacier, which can make collapse more likely, Nature News reported.  The Himalayas have seen more surging glaciers as well as higher levels of rainfall likely due to climate change, 2011 study in the journal Arctic, Antarctic and Alpine Research.