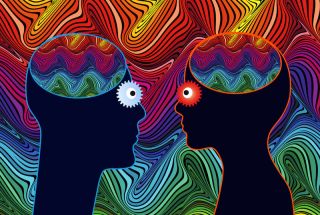 The drug LSD may make it easier for the brain to access distantly related words, a new study finds, suggesting that the drug activates certain language networks in the brain.

The researchers also found that people under the influence of LSD self-monitor their own language less than people who haven't taken the drug, according to the study, published Aug. 18 in the journal Language, Cognition and Neuroscience.

The study didn't address questions about the effect of the psychedelic drug on creativity or mental health, but could lead to new research in those areas, said lead researcher Neiloufar Family, a postdoctoral scientist at the University of Kaiserslautern in Germany.

"Our results do hint toward having access to further-away associations under the influence of psychedelics," Family told Live Science. [Trippy Tales: The History of 8 Hallucinogens]

The brain on LSD

In the study, Family and her colleagues asked 10 people to complete a rather dull picture-naming task while either under the influence of LSD or not. The participants came to the lab on two different days to do the experiment, and weren't told which day they were getting the drug, although the psychedelic effects probably made clear if they had received it, the researchers wrote.

LSD, or lysergic acid diethylamide, is a compound that is similar in structure to the neurotransmitter serotonin. It can thus act on cellular receptors that recognize serotonin, in particular one called 5-HT2A. The drug's action on this receptor has a wide array of effects, including odd visual distortions and "ego dissolution," or the sense that the boundaries between the self and the rest of the world have disappeared.

A growing area of research is investigating whether some of these psychedelic effects might have promise for treating people who have mental illnesses; in 2014, for example, researchers reported that taking LSD in a very controlled, supported environment improved people's anxiety symptoms over time.

Family said she and her colleagues were interested in studying LSD's effect on language processing in part because by altering the brain with the drug, they could learn about thought processes that are usually hidden. Language is largely automatic and unconscious, Family said, so people can't explain how they pick words or why they might stumble now and then.

"You're looking at an altered state of consciousness to get a better idea of how the brain works in its normal state," she said of the LSD experiment.

The participants were shown 32 different pictures in three different categories — clothing, body parts and vehicles — and told to name the objects. Pictures were cycled through again and again, so participants had to name more than 700 in total. It's a long, boring and repetitive task, Family said, and that's no accident: The researchers wanted the participants to get a little bored, so the experiment could test whether any errors the individuals made resulted from the drug or just a wandering mind.

In general, the types of errors people make when they speak can illuminate their brain functions. For example, if someone stutters over the beginning of words, it suggests they're paying too much attention to their word production. If they're making mistakes with sound, it might show something about how the brain represents different sounds.

In the new study, the researchers found two differences in the types of errors produced by the participants when they were on LSD versus when they were sober. One was that the participants made more errors when on LSD than when sober, but not just any errors. They made their mistakes fully, without catching themselves. Instead of seeing a picture of a car and saying, "Trrr — car," for example, they'd say the complete word "Truck" before realizing they were wrong.

"They would say 'foot' for 'hand' or 'sock' for 'shoe,'" Family said. This result suggests that LSD was increasing the activation of what linguists call semantic networks. That means that related words were closer to the surface of a person's consciousness, and were competing to be expressed. [Images: Scientists Analyze Drawings by an Acid-Tripping Artist]

The study is the first since the 1960s to look at LSD's effect on language (though a 1996 study looked at language processing under the influence of the similar psychedelic drug, psilocybin, or magic mushrooms). The new research suggests that LSD might make linguistic free-association flow more smoothly, Family said, but the study was small and more work needs to be done. She said she hopes to conduct further studies on language and LSD using psilocybin to elucidate what's going on in the brain while people are under the drug's influence.

LSD research got a bad rap in the 1960s when the CIA funded secret research investigating the drug's use for mind control. Today, doing research with the drug requires cutting through a lot of red tape, and the subject is still taboo enough that funding is hard to come by, Family said. Nevertheless, scientific interest in psychedelics and the brain is growing, she said.

"Because societal attitudes are slowly moving away from the hysteria that surrounds these substances, research has been gaining momentum," Family said.