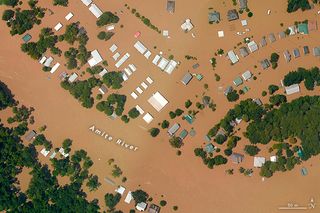 Areas along the Amite River have experienced the most extreme flooding.
(Image: © NOAA)

Intense rainfall is causing widespread and disastrous flooding in parts of Louisiana, and new measurements from a NASA satellite illustrate just how much precipitation has accumulated in this region of the Southern United States.

The animation depicts rainfall totals every 3 hours over a 72-hour span, from Aug. 12 to 14. Some areas received more than 20 inches (50.8 centimeters) of rain over those three days.

Rain totals in southern Louisiana were at least 600 percent over normal levels over a seven-day period, according to the Lower Mississippi River Forecast Center of the U.S National Weather Service. [Aftermath of a Storm: Images from Hurricane Katrina]

NASA noted that their observed totals are regional and remotely sensed, according to the Earth Observatory. As such, rainfall accumulations could be much higher when measured from the ground.

The downpours in Louisiana have resulted in rapidly rising rivers and serious flooding, forcing tens of thousands of people from their homes and taking at least 11 lives.

"Like a tropical depression, the low had a warm core, and the counterclockwise flow of air around the storm brought huge amounts of tropical moisture from the near-record-warm waters of the Gulf of Mexico and northwest Atlantic northwards over land," Masters and Henson wrote on their blog, Weather Underground. "The amount of moisture in the atmosphere over the Gulf Coast region over the past week has been nothing short of phenomenal."

Areas along the Amite River have experienced the most extreme flooding — the river exceeded its previous height record in Magnolia, Louisiana, by more than 6 feet (1.8 meters). An aerial photography mission conducted by NOAA captured some of the damage from the historic flooding, showing areas in Port Vincent, southeast of Baton Rouge, with streets and houses submerged in floodwaters.