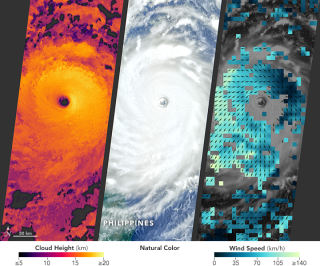 The swirling mass of white clouds, the placid eye of the storm: Satellite imagery has become common enough that it's easy to envision the whorl of a typhoon as seen from space. But that mental picture likely doesn't include such details as the relative air temperatures, or just how strong the wind is blowing.

NASA's Earth Observatory recently released satellite images, taken with three different instruments, of Super Typhoon Nepartak as it raged over the Philippine Sea before making landfall in Taiwan on July 8. The images include visualizations of the height, direction, wind speed and temperature of the vortex, which sustained winds at 113 knots (130 mph or 210 km/h).

The first of the images shows the range of the Multi-angle Imaging SpectroRadiometer (MISR), an instrument launched in 1999 aboard Terra, a school-bus-size satellite that is considered the flagship of NASA's Earth Observing System (EOS). Multiple cameras at different angles provide depth cues, allowing scientists to calculate information such as the height of clouds. [Hurricanes from Above: Images of Nature's Biggest Storms]

MISR has been used for a variety of purposes, such as collecting information on wildfires, volcanic plumes and dust storms across the globe.

A second image shows the direction and speed of wind near the ocean surface, based on the roughness of the water. That data comes from the RapidScat instrument aboard the International Space Station.

The thermal image came from the Moderate Resolution Imaging Spectroradiometer (MODIS) aboard the Aqua satellite. The MODIS instrument can detect a wide range of electromagnetic radiation, from microwaves to infrared, visible and ultraviolet light. And that flexibility allows it to directly or indirectly measure temperature, how much radiation is reflected by the planet's surface (albedo), photosynthesis activity and levels of airborne particles (aerosols).

Nepartak began as a tropical depression on July 2, eventually building to the wind speeds that qualified it for "super typhoon" status. It killed two people and injured 72 in Taiwan before moving to Fujian Province, China, where it killed six and left eight missing.