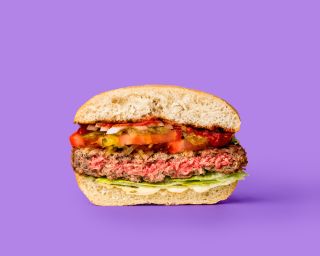 This burger isn't made of meat, but the heme gives it a 'bloody' look.
(Image: © Impossible Foods)

There's a new "bloody" burger in town, but this one is entirely vegan. The juicy patty contains exactly zero animal products, but because of a bright red molecule called heme, it looks like a hamburger served medium rare, said the burger's creators, Impossible Foods.

The new delicacy, called the Impossible Burger, contains a number of ingredients, including wheat protein for chewiness, coconut oil for its fatty flavor and potato protein to help the burger cook like meat, Impossible Foods (IF) said. But the star ingredient is leghemoglobin, a protein that occurs naturally in the root nodules of soybean plants, the company said.

Leghemoglobin carries heme, a molecule that contains iron. In blood, hemes are part of the hemoglobin protein, granting hemoglobin its ability to carry oxygen. Heme also appears in myoglobin, a protein found in muscle tissue. The heme in myoglobin helps that protein store oxygen, and gives meat its red or pink color. [7 Foods Your Heart Will Hate]

In addition, heme is largely responsible for meat's unique taste and aroma. The greater the concentration of heme, the more "meaty" the meat tastes, IF said. But while it's known for its roles in hemoglobin and myoglobin, heme is also found in legumes, including peas, lentils, peanuts and soybeans.

The researchers at IF decided to investigate whether the heme found in soybean plants could be incorporated into a juicy, plant-based burger, they said. The answer, it turned out, was yes.

"Although it constitutes less that 1 percent of the total ingredients, by catalyzing the chemical reactions that turn simple nutrients into flavors, leghemoglobin gives our burger its unmistakably meaty taste," IF said.

The burger is the brainchild of Dr. Patrick O. Brown, the CEO and founder of Impossible Foods, a California-based company. Brown is known for co-founding the open-access journal the Public Library of Science (PLOS) and for inventing the DNA microarray, a chip that can measure what genes are active within a genome.

It took more than five years for Brown and his colleagues to develop the Impossible Burger. After figuring out how to mix heme into the burger, they needed to find an affordable and environmentally friendly way to develop heme, especially because Brown wanted to make food that was good for both people and the environment, IF said.

"Harvesting heme directly from the roots of soy plants would require substantial soil disruption — which releases carbon into the atmosphere, a negative environmental impact that does not fit our mission," IF told Live Science.

Instead, they used genetically modified yeast (similar to the one used to make Belgian beer) to make heme. "Making heme in yeast has a much lower environmental footprint than harvesting it directly, and it produces a heme that is identical to the heme found naturally in legumes and all nitrogen-fixing plants," that is, plants that trap nitrogen because it helps them grow, IF said.

In fact, a life-cycle analysis conducted by IF found that the burger requires a quarter of the water and one-twentieth of the land needed to produce the same burger from a cow. And it produces just one-eighth of the greenhouse gas emissions.

But, for now, production is limited. The Impossible Burger debuted on July 27 at the restaurant Momofuku Nishi in New York, where it is selling for $12 with fries, IF said. In the coming months, the burger will also be sold at restaurants in Los Angles and San Francisco, the company said.

"There are still lines out the door to try it at Momofuku Nishi, and the reaction we are getting is phenomenal," IF said. "People, including hard-core meat devotees, keep telling us they love our burger."

If all goes well, the company plans to sell across the United States, "including at some point in grocery stores, and overseas as we ramp up our production capacity," IF said.