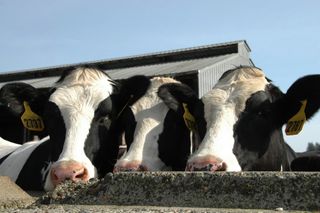 Beef production takes a big toll on the environment, according to one of the most comprehensive studies to date on livestock management in the United States.

"We were trying to see how many resources we take from planet Earth in order to create what we are eating," Ron Milo, the study's co-principal investigator and a professor of plant sciences at the Weizmann Institute of Science in Israel, told Live Science. "We found that it is much larger for eating beef." [7 Perfect Survival Foods]

Milo and his colleagues collected data on the environmental costs per calorie of dairy, poultry, pork, eggs and beef — foods that account for 96 percent of the calories Americans get from animals. The researchers consulted records from the U.S. Department of Agriculture, the Department of the Interior and the Department of Energy from 2000 to 2010.

The environmental costs of dairy, poultry, pork and eggs are fairly similar, the researchers found.

Plants — including potatoes, wheat and rice — require even fewer resources, the researchers also reported. Compared to plants, nonbeef animals require an average of six times as much land, half as much irrigation water, two times as much greenhouse-gas emissions and three times as much fertilizer use.

In contrast, the same number of calories from beef is much more taxing on the environment — requiring 160 times more land, eight times more irrigation water, 11 times more greenhouse-gas emissions and 19 times more fertilizer than plants, according to the researchers.

Other studies have identified beef as a major drain on environmental resources, but this is one of the largest investigations on the environmental costs of livestock in the United States, said Nathan Pelletier, president of the Global Ecologic Environmental Consulting and Management Services in British Columbia, Canada.

"It's a good message to reiterate," Pelletier told Live Science. "What remains to be seen is to what extent this information will influence policymaking."

Still, the new study can help people make informed decisions about what to eat for dinner, the researchers said.

"Maybe I like beef very much," Milo said. "But from knowing those numbers, maybe I could just eat it once a week, or once every two weeks."

The researchers published the findings today (July 21) in the Proceedings of the National Academy of Sciences.