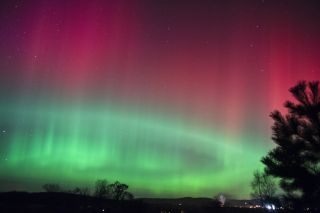 In an unexpected display (the best Henderson had seen since the end of the previous Solar Cycle in 2006), the aurora offered a fairly rare occurrence of this folded arc despite initial forecasts of reduced activity. Date: February 27, 2014

The northern lights, also called the aurora borealis, are some of the most breathtaking natural displays in the world, offering views of shimmery illuminations that appear to dance across the sky. The dramatic celestial display can generate some truly spectacular images, but what's the best way to photograph the northern lights?

The northern lights occur when charged particles that originate from solar wind interact with elements in Earth's atmosphere. According to NASA, "the aurora is the only visible evidence that the sun and the Earth are a system connected by more than sunlight."

But you don't need much more than some basic camera equipment, a sense of adventure and a tolerance for cold to capture the celestial phenomenon. Dennis Mammana, an astronomy writer and expert aurora photographer, and Jim Henderson, who has photographed more than 300 aurora displays in northeast Scotland, gave Live Science some tips to snap a great shot. [See Breathtaking Photos of the Northern Lights]

Mammana said the most common question he gets about photographing the northern lights is, "What camera settings should I use?"

"The answer is always the same: It depends," Mammana told Live Science.

Frustrating though this may be, it's the nature of the aurora. Photographing the northern lights means trying to capture a complex, dynamic and relatively finicky natural wonder, so there is no silver bullet, he said.

"Some things you can anticipate, but Mother Nature doesn't always follow the rules," Mammana said.

That's why it's crucial to have a camera that you can operate manually, as well as a tripod and spare batteries. Batteries don't tend to work well in the cold, and if you're shooting the northern lights at night, chances are that temperatures will be low. Storing extra batteries in an inside pocket will help keep them warm should you need to change them out, Mammana said.

Another important thing to remember is that photographing the aurora requires trial and error. Henderson said his benchmark is a 20-second exposure at an ISO of 1600. The length of an exposure corresponds to the shutter speed on the camera: the slower the shutter speed, the longer the exposure. ISO refers to the sensitivity of the photo cell in the camera. Henderson also typically sets his lens aperture, which measures how much light is let in, at f/2.8 to f/5.6.

"Experience has shown me that the best images are gained by some degree of 'overexposure,' so I tend not to use the camera's Auto setting," Henderson said. Slightly overexposing the images can make them appear more saturated and colorful, he added. [Northern Lights: 8 Dazzling Facts About Auroras]

Henderson recommends the following camera settings as a starting point:

The aurora mainly excites oxygen gas, which gives it a green color at low altitudes and a red color at higher altitudes. Nitrogen occasionally interacts with the aurora as well, which causes the purple hues in the celestial displays. "Other colors appear visible to the human eye, such as white, bluish hues and yellow," Henderson said. "These are lesser display levels and are a function also of our eyesight, weather and atmospheric conditions at the time."

Mammana works with a similar setup, with a high ISO (around 1600) and a wide-open aperture at f/2.8. Then, he'll try a long exposure of about 15 seconds. Next, he'll check how the image turned out and make adjustments from there. This sort of instant feedback is why he prefers digital cameras to film, he added.

"Film takes time to absorb the image and do something with it, whereas digital is a linear response," Mammana said. With digital cameras, you also don't have to wait for the photos to be developed.

"My experience is that the digital medium is far superior to old film-based photography," Henderson said.

If you do opt for film as your medium, you'll want to ensure you have a fast film (around 1600 ISO), but those are becoming harder to find, Mammanasaid. He has a film-specific tip: Get your negatives developed near where you shot the aurora so the photo professionals know what to expect. If you don't make it clear that you intend for the sky to appear multicolored, your photos might get color corrected, he said. [Photo Future: 7 High-Tech Ways to Share Images]

If you're looking for ideas for what to bring with you, Henderson recommends packing the following gear:

Be prepared to take a lot of photos

Aurora science is relatively new (research on these celestial displays has only been conducted for the past 100 years or so), and scientists are still puzzled by exactly how the lights move.

The "forms of display can be patching, patches of light, usually of a faint colour hue, pulsating as if being switched on and off; streaming or flaring where bright patches of light climb up the ray like a fuse burning; flaming with pulsating bands of light shooting upwards from the horizon into the upper atmosphere and even lightning flashes can be seen in the aftermath or proceeding a display similar to electric storms but without any thunder clap sounds," Henderson told Live Science in an email.

Mammana speculated that the movement may have to do with the speed of the magnetic particles when they enter the atmosphere. But ultimately, their behavior is unpredictable. When a "breakup" — a major aurora activity that begins as a small arc that eventually fractures across the sky — occurs, Mammana will often aim his camera and hold the shutter down, capturing 100 to 200 shots in a sequence. He'll search back later and pick out images with the best composition, he said. [Aurora Photos: Northern Lights Dazzle in Night-Sky Images]

When the aurora is active, "the average person can go through 1,000 or more shots in a night," Mammana noted.

"Given the scale of aurora displays, a wide-angle lens is needed to capture its scale," Henderson said. He suggested focusing on the stars when using a lens like this, because setting a wide aperture can often lead to fuzzy, out-of-focus photos.

The biggest challenge when photographing an aurora is knowing when it's going to happen.

"In my early days, it was seat-of-the-pants — sit and wait on any clear, dark night and hope something happened," Henderson said. Now, websites such as Spaceweather.com make it possible to know a few days in advance the likelihood of a display, but nothing is guaranteed.

Mammana recalled one particular night in Fairbanks, Alaska, when no aurora activity was predicted but he decided to grab his camera and go out anyway. Even though there was absolutely no reason for the aurora to show, it exploded over his head, he said. He was taken by such surprise that he didn't even have his settings properly adjusted.

"It came out of nowhere," Mammana said. "It was like liquid, colored oil flowing down the sky."