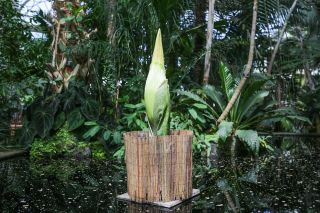 Countless people are watching this corpse flower, waiting for it to bloom and release the putrid smell of rotting flesh.
(Image: © New York Botanical Garden)

The stench of rotting flesh will soon permeate the New York Botanical Garden (NYBG), possibly today (July 25), when a rare plant known as a corpse flower blooms and releases an odor similar to that of putrefying flesh, botanists say.

Despite the stench, horticulturalists and the public are flocking to see it, partly because the corpse flower (Amorphophallus titanum — a scientific name that translates to "giant misshapen phallus") blooms only for a few days once every seven to 10 years, representatives from the NYBG said.

"Perhaps [people come] because it is one of the largest flowers in the world, and its blooming cycle is unpredictable," NYBG representatives said in a statement. "But more likely, it is due to the infamous odor it releases during its brief 24- [to] 36-hour peak bloom — like the smell of rotting meat." [Photos: Stinky 'Corpse Flower' Blooms]

NYBG horticulturalists spotted a bud on the rare flower on July 15 and moved the plant to public display on July 18. The enormous specimen is now attracting crowds at the Palms of the World Gallery, NYBG reps said.

People who can't make it to the garden in the Bronx can watch a live stream of the corpse flower on YouTube, NYBG representatives added.

The botanical garden has a lengthy history with corpse flowers. The 6- to 12-foot-tall (about 2 to 4 meters) plant is native to Sumatra, Indonesia, but one bloomed at the NYBG in 1937, making it the first time a corpse flower had bloomed in the Western Hemisphere, according to the NYBG. The last time one bloomed there was in 1939, horticulturists said.

From the moment a bud appears, the plant undergoes an impressive transformation.

At the beginning of the bloom cycle, the bud grows 4 to 6 inches (10 to 15 centimeters) per day. Then, parts of the bud's base fall off, and the large, frilly sheath that covers the bud opens, revealing a dark burgundy color that looks like a bloody body, NYBG reps said. Just like rotting flesh, the center of the flower is hot, about the temperature of a person — likely to help disperse the stink, they said.

The flower's sickly smell attracts pollinators, such as dung beetles, flesh flies and other carnivorous insects, which eat dead animals. People may be familiar with some of the scents, including timethylamine, a molecule that smells like rotting fish, National Geographic reported. The magazine added that another substance made by the corpse flower, isovaleric acid, smells like cheesy and sweaty gym socks. These putrid odors are smelliest when the flower reaches peak bloom, the NYBG reps said.

The garden acquired the soon-to-be star in 2007 and expects it will take another decade or so before it blooms again.

However, the garden's corpse flower isn't the only putrid plant in the United States. People can also watch live-stream videos of a corpse flower at the U.S. Botanic Garden in Washington, D.C., and at Indiana University.