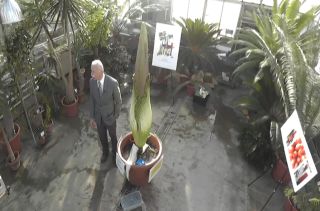 In a matter of days, perhaps hours, a rare corpse flower will bloom in upstate New York. True to its name, the plant is expected to unleash a stench like rotting flesh.

Affectionately called "Wee Stinky," this corpse flower lives in a greenhouse at Cornell University in Ithaca, New York. Horticulturists at the school, who have been preparing for the plant to bloom for weeks, say it could open up any day now. Those curious can watch the rare spectacle online, mercifully, without the smell.

The species, also known as titan arum, is found in the rainforests of central Sumatra. The plant's bloom is just as short as it is pungent; corpse flowers only remain open for 24 to 48 hours before they wither away. [In Images: A Corpse Flower Blooms]

Wee Stinky had been dormant for more than two years, but last month, it became clear that the plant was ready to bloom again, according to Cornell's titan arum blog. The corpse flower started growing quickly. As of this morning, it measured more than 6 feet tall (1.8 meters). On Oct. 23, the plant wasn't even 2 feet tall (0.6 m).

It's hard to predict the exact day a titan arum will bloom, but Cornell's experts wrote that Wee Stinky's growth will slow and its outer layers will start to peel away right before it opens. To provide a sense of what this year's brief bloom might look like, Cornell has put together a time-lapse video of the first (and last) flowering of Wee Stinky. That bloom began on March 18, 2012, and lasted less than 48 hours. More than 10,000 visitors flocked to the greenhouse over five days to catch a glimpse (and perhaps a whiff) of the titan arum.

The open bloom may look like a single giant flower, but technically, it isn't. The plant's purple "petals" actually make up an outer skirt called a spathe, and the tubelike spike at its center is called a spadix. These structures have thousands of little flowers called an inflorescence.

Smelling like death actually helps this plant species survive. The fetid stench lures important pollinators like flesh-eating beetles and flies. The spadix heats up at the beginning of the bloom — becoming as warm as a human body — to help spread the odor.

Horticulturists at Cornell acquired a year-old seedling in 2002 that grew into Wee Stinky. A corpse flower may not bloom for the first time until it is about 10 years old. But after that, it could open up again every few years.

The bloom is a research opportunity for scientists at Cornell. Sensors on and above the blooming plant will collect data on the temperature and the volatiles that simulate the cues of a rotting corpse and attract pollinators.

Currently, Cornell's Kenneth Post Laboratory Greenhouses are open to the public from 9 a.m. to 4 p.m. EST, but visiting hours will be extended once the flower blooms.