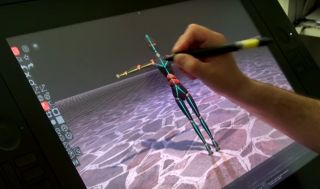 With just the stroke of a pen or the click of a mouse, you can now transform your 2D sketches into 3D animations.

New computer software, known as Mosketch, allows anyone to try their hand at 3D animation without toiling away at numerous sketches. The software combines two major animation methods: direct kinematics, which deals with the change of a character's joints, and inverse kinematics, which takes into account the movement of a character's body part. Artists can use the 3D software to seamlessly convert a 2D stroke into 3D moves, according to its developers.

Now available in beta, Mosketch was developed by Moka Studio and École Polytechnique Fédérale de Lausanne (EPFL), a research institute in Switzerland that specializes in physical sciences and engineering. Mosketch is being promoted as professional-grade software that can "be used by anyone, from independent artists to animation studios." [Gallery: 3D Scans in Hollywood and Hospitals]

Ronan Boulic, head of the immersive interaction research group at EPFL, said the software automates the natural flow of action of a graphic artist so that anyone can create animations.

When using the software, artists are able to focus on visual cues rather than detailed coding to create the animations, Boulic said. The software does the background work of programming a movement, while the artist simply uses their pen or mouse to draw the prompts.

"We rely as much as possible on the visual interaction on the screen, through the location of the pen on the screen," Boulic told Live Science. "As soon as you draw a line, stroke, you see the line on the screen and the algorithm instantaneously adjusts the pose of the 3D figure to match this line. So there is no complicated user interface."

The software also allows users to change viewpoints as they change a character's poses, adding to the experience of animating in a 3D space, Boulic said. Changing perspective as the drawings are animated is similar to a camera moving around the animated space.

Behind the computer screen, two algorithms work together in Mosketch's software to fluidly create these 3D animations.

"One converts the 2D strokes that youꞌve done on the screen, converting them into the pose of the character," Boulic said. "The second algorithm is a bit different. The user would pick one body part, letꞌs say the right hand, and would guide the position of this body part in space and the limb would automatically be adjusted."

This combination of actions was inspired by the way 2D artists work, Boulic said. A 2D artist could endlessly redraw little strokes until they achieve their vision. Then, micro-changes would need to be made to animate that vision, meaning the artist would need to create even more strokes.

Boulic said it was this series of actions by a 2D artist that Mosketch aims to reproduce, with the added value of being in 3D.

“We try to combine the two worlds, exploiting the skill of the 2D artist with this sequence of strokes," Boulic said. "That is then visualized in the successive adaptation of the 3D [movements]."

And Mosketch is not limited to just 3D animations, Boulic said. The mathematical equations and algorithms behind the software could have applications for virtual reality and robotics, he added.